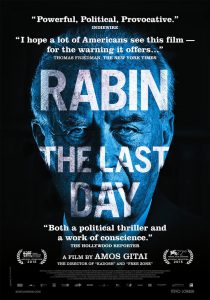 In their docudrama, Rabin, the Last Day, co-writers Amos Gitai and Marie-Jose Sanselme utilize both dramatizations and live footage to recount the events that led to the assassination of Israeli Prime Minister, Yitzhak Rabin, and the implications of this event on Israel and Middle Eastern peace. (EML: 4.5/5)

Shimon Peres, Yitzhak Rabin’s successor, sits alone across from an interviewer recounting his memory of the only assassinated Israeli Prime Minister. He describes Yitzhak Rabin as a man who did not back down, not in the face of threats or anger. He describes the circumstances that led to that rally, the fateful day when a young country would experience its first political assassination. The interview ends with a what if. What if Rabin had lived? Would Israel have been in a better place? Shimon Peres’ answer is simple. Yes.

An aerial shot of Kings Square (now Rabin Square). Live footage from the peace rally that Shimon Peres and Yitzhak Rabin held to try and encourage the Israeli population to believe in their vision for how to achieve peace with their Arab neighbors. The crowds are huge.

An aerial shot as Rabin exits a building. He waves to the crowd and shakes the onlookers hands, flanked by security. The car door opens. Suddenly, from behind him, a non-descript man in a t-shirt pulls a gun. Shots are fired. Screams echo. The camera turns toward the sky. To the ground. Chaotic.

The real footage turns into a recreation, a dramatization. A boardroom. Three men, the footage of the assassination playing on a projector screen behind them, discuss the circumstances that must have led to this horrifying event. The only answer, lax security.

Pan across to the filmmaker who serendipitously captured the assassination footage. He describes where he was standing, how he’d chosen his spot. He remembers a conversation with a plainclothes policeman, a man who stopped him to ask him questions, inspect his camera and credentials. He was told he could film whatever, but could only film Rabin when he made his way to the car. This, coupled with the darkness and the disorder of the square, gave the filmmaker pause that something bad was about to happen. He claims to have focused on Yigal Amir, trying to decide if he was a threat. He decided he was not. Then, Yigal Amir pulled a gun and shot Yithak Rabin.

Yitzhak Rabin arrives at the hospital. “Yigal Amir” (Yogev Yefet) is taken away by a hoard of police. Intercut between the two scenes. Doctors and nurses rushing to Rabin’s side. Police men shoving Amir into a squad car. 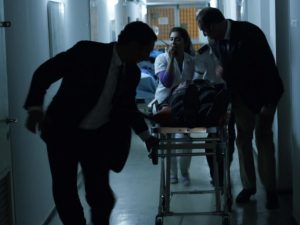 Amir is brought to the police station and booked. Rabin lies on the operating table, his shirt soaked in blood. Amir resists having a woman touch his hand to do his fingerprints. The doctors discuss Rabin’s prognosis. Amir sits in the interrogation room. He puts three fingers to his forehead and recites the Shema. Voiceover of newscasters reporting the identity of Rabin’s assassin.

The announcement is made. Rabin is dead.

Interweaving real footage with dramatizations, writer/director Amos Gitai tells not only the story of Yitzhak Rabin’s final days, but creates an atmosphere. Along with his co-writer, Marie-Jose Sanselme, Gitai seeks to recreate the circumstances that led Amir to commit such a heinous crime. The dramatization serves to present the audience with the facts in an engaging way, making them feel involved in the discovery of details, a part of the process. Though the film does seem to drag, the dramatizations allow the film to have a clear narrative, as opposed to merely being a bunch of talking heads positing on the circumstances and results of Rabin’s assassination. Rabin, the Last Day is a true blend of narrative fiction and documentary filmmaking, and Gitai takes care to make the film feel more like a movie than an educational journey.

For Gitai, the film is less about the act itself, which is over in the first thirty minutes, but more about the results of this act on Israeli politics and peace, particularly in regards to the settlements. In a time of continued unrest in the Middle East, the issue of Israeli settlements in territories “controlled” by the Palestinian Authority is still a relevant conversation. Steeped in controversy, the role of settlements is one that has continued to be central to peace negotiations and Israel’s desire to truly establish an autonomous Palestinian state in the once occupied Gaza Strip and the still occupied West Bank. Even twenty years after Rabin’s assassination, the result of Jewish outrage over relinquishing control of Jewish holy sites in the interest of showing good faith in peace negotiations with Palestinians, the right to settlements is one that continues to be agonized over.

Through recounting the trial that follows Rabin’s assassination, Gitai draws out the arguments on both sides. Should Israeli citizens have the right to settle lands they believe to be holy? Should the Israeli government have the right to forcibly remove its citizens from these sites? Should the settlements be allowed to remain but under a Palestinian rather than Israeli government? Gitai’s film does not provide the answers, at least not outright, but it reminds us that the questions are still relevant. As Israeli and Palestinian citizens search for a road to peace, settlements continue to be a huge block on both sides. Rabin, the Last Day reopens the dialogue on Israel’s obligation to peace, obligation to its citizens, and its obligation to Judaism. 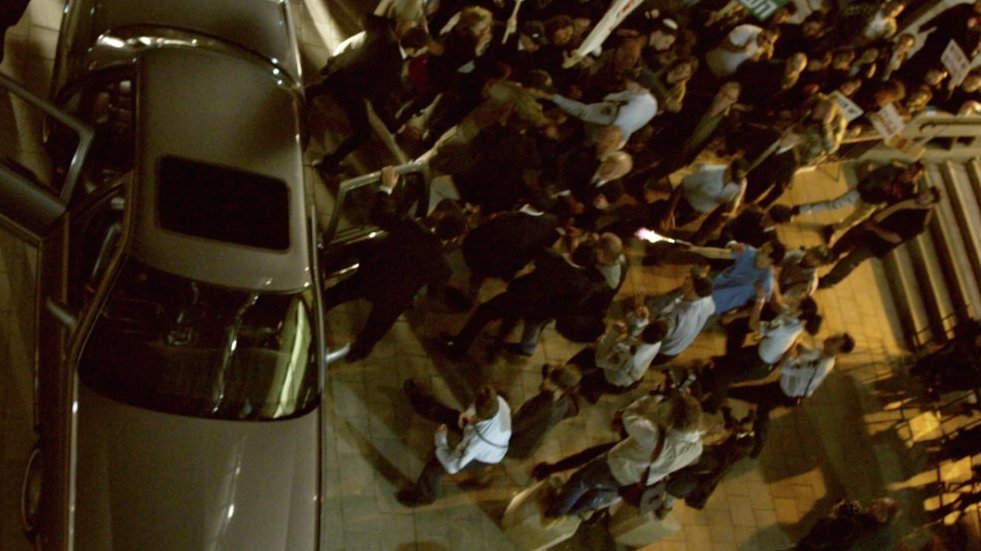 Top Photo: The movie poster for Rabin, The Last Day

Middle Photo: In a dramatization, Yitzhak Rabin is rushed through the hospital after being shot.

Bottom Photo: The iconic moment as Rabin is shot by Yagil Amir on his way to his motorcade.

Q: Does Rabin, the Last Day pass the Bechdel-Wallace Test?

Unfortunately, no.
Since the bulk of the narrative focuses on Rabin and the subsequent trial that was held and led by three men, there are few female characters included and almost no interaction between multiple female characters. While the lack of women is disappointing, it’s unsurprising as the film sticks closely to the true events and therefore, is limited to the male dominated cast that existed.