Director Stacy Title’s The Bye Bye Man centers on a group of possessed college students who try their best not to spread their knowledge of a name that brings hallucinations, fear and even death when spoken. (GEP: 3/5)

The frightening pull of the titular Bye Bye Man is staved off by the film’s repeated phrase, “don’t say it, don’t think it,” which, funnily enough, will be my reaction if anyone brings this film up to me in the future. Please, just don’t say it.

College student Elliot (Douglas Smith) moves into a creepy off-campus house with his girlfriend and best friend in the film’s long exposition, which involves the usual tropes – creaking doors, flickering lights, mysterious noises and dusty, dark basements. Say it with me now: “What could possibly go wrong?”

This slow beginning takes an intriguing turn when Elliot discovers scribbled writing in the drawer of the home’s old nightstand, reading “don’t say it, don’t think it” on crinkled old shelf paper. When he pushes the paper aside, he reads the name that propels the story forward – “the bye bye man. “ And guess what?!?! He thinks it and says it. (Screenwriter Johnathan Penner never mentions what Elliot’s major is, and we never actually see him go to class…I’m just saying.) He even types the cursed name into a search engine, and I personally think Penner should’ve changed the tagline to “don’t say it, don’t think it and definitely don’t Google it.”

Elliot and his three friends now know the name, which doesn’t immediately appear to be harmful – until it slowly takes over their consciousness, causing them to hallucinate and live in fear of the murderous man who is “coming for them.”

The group quickly realizes that they can’t share this information with anyone, because the simple act of knowing this name means a lifetime of hallucinations and being hunted. This leads to a messy, murderous web of lies they can’t explain their way out of, creating an interesting plot device that actually makes up for the so-so first hour. They can’t tell the police, they can’t tell their families – if they do, they put them in life-threatening danger. The more they try to keep it to themselves, the closer and more terrifying the Bye Bye Man and the paranoia he brings become. (If you think and say the very thing the cryptic old writing tells you not to think and say, you’re also bound to follow the weird noises, go into the dark basement and open the ominous door. Elliot definitely missed the whole “follow directions” lesson in kindergarten.)

We eventually do meet the Bye Bye Man himself – a poor man’s Lord Voldemort (but at least Tom Riddle had some decent one-liners, am I right?). He’s scary enough, but the dialogue is what keeps this film from meeting its potential. (In one scene, Elliot hits his roommate with a baseball bat in a hallucinatory fog. He proceeds to say, “I almost killed you with a bat!” And I thought the name of the movie was redundant.)

The idea of a name causing so much terror and trauma is a pretty decent metaphor for human nature – the idea of having an important secret, but being unable to share it to spare others from harm. It’s a nightmare, actually – the thought of something ruining your life, but being unable to tell people about it. Another intrinsic theme is truth – once you say something, you can’t take it back. What you say changes things. It’s a good moral if you’re willing to look for it, and it actually makes The Bye Bye Man at least somewhat memorable.

The most important thing I learned from Title and Penner’s feature: if you have a baggy ominous black robe hanging from a hook on your wall that occasionally looks like a murderer lurking in the corner, maybe take down the robe. Come on, Elliot. 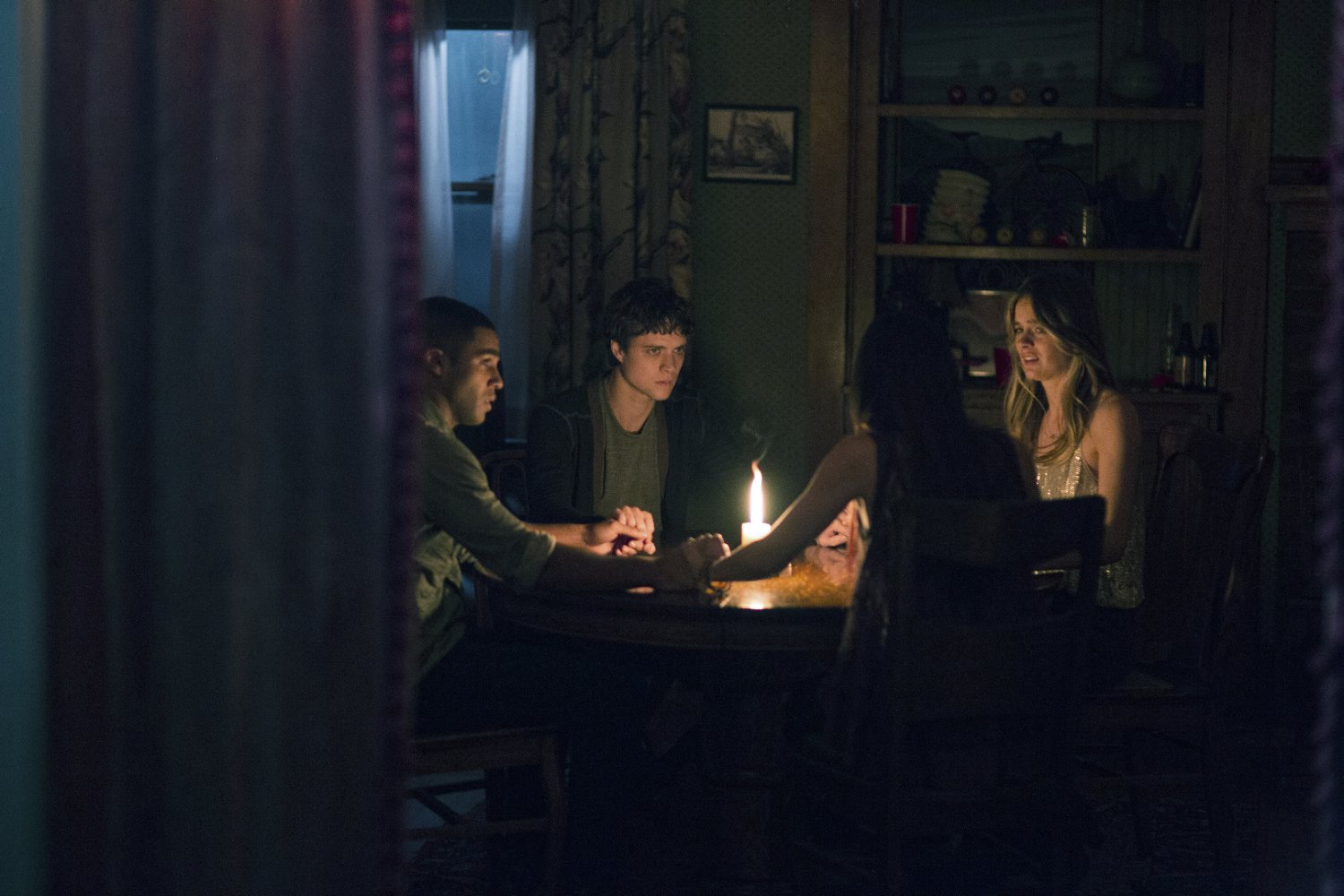 Top Photo: The name that catapults Elliot and co. into terrifying chaos.

Bottom Photo: Every teen horror film needs a first-act seance. Every one.

Q: Does The Bye Bye Man pass the Bechdel-Wallace test?

No, and even worse than that, it totally wastes Carrie-Ann Moss as the skeptical Detective Shaw.