Oscar-winning documentary filmmaker Laura Poitras indeed takes huge risks in this portrait of WikiLeaks founder Julian Assange. Coming out of the screening room, I felt somewhat bludgeoned by the implications of what I had seen.

It is clear that Poitras began this project convinced that Assange was a hero. She is, after all, the filmmaker who received an Oscar for CitizenFour, the film which documented her extraordinary meeting with Edward Snowden in Hong Kong for posterity. (Click here to read her Oscar acceptance speech.) But now, as the year go by and events accumulate, she is beginning to have her doubts.

As one woman says during a fraught meeting: “There is a sickness inside the community…” Risk is less a film than a deposit in our national time capsule. (JLH: 4/5)

Reader: Please allow me to begin this review of Risk (the new documentary by Laura Poitras) with a personal anecdote. Last Tuesday morning (5/2/17), I had an appointment. I knew where it was. I knew when it was. I thought I knew how long it would take to get there. I was wrong.

I left my apartment building (located on a leafy side street in Brooklyn), turned onto the main drag, and walked one block to the bus stop. According to the schedule I had downloaded from Transit NYC (which matched the schedule posted at the bus stop), a bus was due in 5 minutes. But ten minutes later the bus still had not come, so a woman at the bus stop started tapping on her smartphone. “It’s late,” she told me. “The ap says the bus will be here in 7 minutes.” SEVEN MINUTES. Not a long wait objectively speaking, but probably long enough to make me late for my appointment.

I could see the problem. I sent a message to the driver telling her I was at the bus stop, and then I watched on my smartphone as she circled around to pick me up (which is actually not as easy as it sounds). When I finally arrived at my destination, I was late for my appointment.

What has any of this to do with Julian Assange? If I told you I “knew” the answer to that question, I would be lying, but my gut says otherwise. Whatever the “facts” here, what I am reporting is a vague and unsettling feeling of betrayal topped by a shiver of imminent danger. And while Risk certainly has a lot of facts — people, places events — to present to its audience, the filmmaker has chosen to end her film on these same emotional notes of betrayal and danger.

It was not supposed to be this way. Risk made its initial debut at the 2016 Cannes Film Festival last May, six months before the US Presidential election in November. Here is a review posted by The Guardian on 5/19/16 that indicates how different the Cannes cut was from the film I saw this weekend at IFC Center in Manhattan. 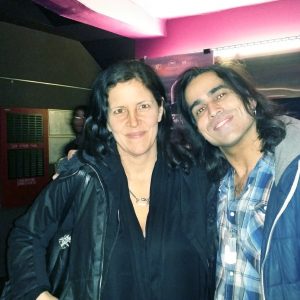 But whatever her intentions as a filmmaker, Poitras is smart enough to realize that her narrative — years in the making — has been overtaken by events. And she is brave enough to recalibrate by adding personal reflections (as voiceovers) in real time. Casual remarks that probably passed unnoticed not too long ago now now carry enormous weight as harbingers of things to come.

Poitras will not be celebrated for this film as she was for CitizenFour, and that is probably as it should be. The night she received her Oscar for Best Documentary for CitizenFour, most of those watching — myself included — probably felt good about applauding her for her daring and her craft. She got herself to Hong Kong under great duress to frame Edward Snowden’s story, and she gave him the time to explain in depth what he thought he was doing and why it mattered. And we thought we knew who the good guys were and who the bad guys were. The internet was good. Cyberspace was good. Transparency was good. Right? Of course, right!

But now we are in mid-story and Laura Poitras is there too, in as much of a muddle as the rest of us. New tools that were supposed to make our world a better place have been co-opted, and people are creating applications with algorithms to control us rather than set us free.

And she now sees — as we see in the watching of her film — that most of these “people” are men, men who think they know a great deal. Julian Assange gives an eloquent speech at the end of Risk about local gardens and global gardens. He perceives himself as a “global gardener.” He wants to eliminate weeds all around the world so more flowers can bloom. But how can he be so sure that he knows which plants are “weeds” and which are “flowers,” and what does he really know about his impact on the ecology of local gardens when he tears at their undergrowth? Has he never heard of invasive species or parasites? Has he no fear of the law of unintended consequences?

Risk is a film by a woman who is just beginning to question things to which she thought she already had answers. She is just starting to wonder if the people — the men — in whom she has placed her trust are as trustworthy as she thought they were. The film about risks taken by Julian Assange in the past turns out to be about the risks Laura Poitras herself is taking in the present. She is a modern Pandora. She has opened a forbidden box and released noxious terrors. I celebrate her for this and hope she will now turn the camera on herself and finish what she has started. That is my hope.

Top Photo: Julian Assange changes his physical appearance in hopes of arriving undetected at the Ecuadorian Embassy in London. He succeeds, in fact, four years later, he is still there…

Bottom Photo: Assange leaves a London courtroom with Amal Clooney (who is an attorney). He is immediately surrounded by press people and hordes of adoring fans. Note that this was prior to her marriage to George Clooney. As Amal Alamuddin, she represented Assange in his fight against Sweden’s attempt to extradite him for questioning in two cases of alleged sexual misconduct and rape. However, even though Poitras was obviously filming him at this time, Amal Alamuddin Clooney is never interviewed or shown in the final cut of Poitras’s film (except in this one long shot).

It is clear that Laura Poitras is doing some interviews because she periodically injects her own reflections in voiceover narration, although most of the time she is just filming what is happening in the room.

However, there is one scene set in Tunis after questions arise about hacker Jacob Appelbaum. The effort of the Tunis women in the audience to grapple — in public — with the implications of these new revelations is truly stunning. Therefore, since several of these women have been named in earlier sequences, I am answering the Bechdel-Wallace Test question with a “yes.”

Poitras could have chosen to leave all of this out (after all, the subject in this scene is Appelbaum, not Assange). So the fact that she chose to include it is highly significant. “There is a sickness inside the community,” the women conclude… with vague feelings of betrayal and a shiver of imminent danger.