Director Tizza Covi and longtime film partner Rainer Frimmel follow the life of a circus lion tamer who loses something important to him in Mister Universo, an Italian drama with surprising depth, realistic friendships and a poignant portrait of the monotony that seemingly any job can take on when it isn’t one’s dream. (GEP: 4/5)

Tairo Caroli stars as the titular lion tamer, a young performer in a dying profession – the most important parts of his act are aging and literally dying off, causing him to question his profession and his place. Though a work of fiction, Covi and Frimmel’s feature plays out like a scripted docuseries – think MTV’s Teen Mom, but quieter and less cringeworthy. As a result, the dialogue is simple to follow in its translated English, making the plight of Tairo and his fellow performers clear within the first 20 minutes.

While the circus seems to be be a point of fascination in modern fiction – from Neil Jordan’s Carnivalesque, released in June to wide acclaim, to Erin Morgenstern’s 2012 novel The Night Circus to Water For Elephants – it isn’t a glamorized, mysterious atmosphere in Mister Universo. It’s simply another place to work, with men and women who question their paths almost daily. There are cages and trains and tents, but rarely the roar of a crowd or excitement of a trick. It comes to life in the stories of Tairo’s counterparts, whom he encounters throughout the film in his search for a lost lucky charm. 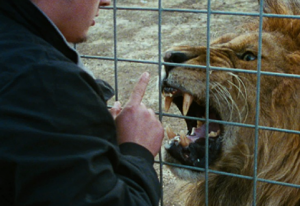 We feel Tairo’s growing impatience throughout the quiet 87 minutes – the monotony and uncertainty are simplistically portrayed, making viewers forget that training and tricking lions actually isn’t your average 9 to 5 job. The work itself is never the focus, but rather how it makes Tairo feel and how it affects his interactions with others, including friends, co-workers and family members. The affection he and his family members have for one another is evident, and one of the most enjoyable aspects of the feature. This emotional realism keeps the plot from venturing into dull territory, and Tairo is immediately likable because of who he is rather than what he does. The words of others lift him up, and the directors’ documentary style makes this exceptionally enjoyable to watch. The actors make these people feel very real in a seemingly effortless way, with everything from their body language to their easy cadence.

Tairo’s prized talisman is stolen early on in the film, and the rest of the feature follows his journey to regain it. His staunchest circus ally, Wendy Weber, is another highlight of Mister Universo, especially when she supports him in his quest to reclaim the amulet that means so much to him – in spite of the circus fortune teller’s belief that he’ll never find it. We slowly learn about his connection to the amulet – where he got it, why it matters, and what his family thinks about its loss. He searches for the man who gave it to him when he was a young child, but we know he’s in search of something deeper without Covi having to spell it out.

Certain themes transcend language and profession, and Covi and Frimmel’s characters emulate the Aaron Sorkin adage, “it’s OK to be alone in a big city as long as you can find family there.” Tairo learns he has all the good fortune he needs in the people around him, and it brings life to an otherwise gloomy place. Tairo and Wendy’s quest to find the lost item doesn’t just enrich their experience, but that of the audience, making for a much more entertaining act than a lion jumping through hoops. Middle Photo: Tairo and Giada, an aging lion in his pride.

Bottom Photo: Wendy and Tairo visit a special street in Rome where the water flows upward.

Yes. Though Wendy helps Tairo in his search for a new talisman, the conversations she has with other women aren’t necessarily about him as much as the object itself.