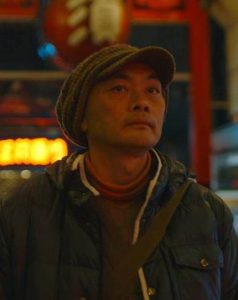 In Japan, a Buddhist priest has made it his life’s work to help suicidal individuals find the means to keep living. His methods, though unconventional, prove incredibly effective in assisting his patients on the path to a better life. In her documentary, director and writer Lana Wilson quietly captures the pain and profundity in the struggle between life and death. (RMM: 4/5)

In Japan, Buddhist priest Ittetsu Nemoto lives with his wife Yuki and young son Teppei in a temple in Gifu prefecture. Following a rebellious adolescence and young adulthood, Nemoto was injured in a motorcycle accident and decided to become a monk before becoming a priest. Realizing that his calling in life was to help people, Nemoto has dedicated his middle-aged years to counseling those who are suicidal by connecting with them and offering himself as a friend. In his work, he aims to understand and empathize with his patients’ pain and willing them to see the value in their lives.

The film opens with Nemoto leading a retreat for patients which he calls “The Departure.” This title refers to death — the departure from this world — and the retreat simulates both the experience and emotion of death. Through guided activities and discussions centered around this topic, Nemoto attempts to help patients understand the people and things that they must give up should they choose to die. Patients must crumple up slips of paper with the names of loved ones written on them. In the dark, they lay down with towels over their faces and listen to the silence. In his own effort to understand of life and death, Nemoto actively participates in each activity.

In addition to this retreat, Nemoto leads other activities such as theater games and exercises in movement that are aimed to help his patients along their path to healing. However, such group activities only make up part of Nemoto’s work, as one-on-one counseling takes up the rest of his time. At one point, we see him at a restaurant; Nemoto sits down to a meal with a man who, distraught over his limited visiting rights to see his children, cries over his noodles. 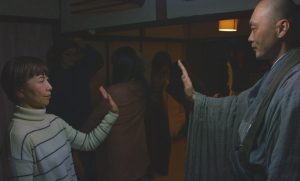 Nemoto’s calling is a taxing one both mentally and physically. Behind his calm, reassuring demeanor lies anxiety and pain of his own that are only exacerbated by those of his patients. “I take on so much of their suffering,” Nemoto says. The calls and emails are endless, and one message left unanswered could set a patient back fatally. Nemoto’s mother, Keiko, tells him directly that he needs to slow down and rest. Yuki, Nemoto’s wife, expresses gently that he should find more time to spend with their young son Teppei, who loves his father dearly. Teppei is the most important person in Nemoto’s life, but both his schedule and the physical toll his work takes make it difficult to spend time with him. To make matters worse, one diagnosis from his doctor could take away the time he has with his son all together.

In this documentary, director and writer Lana Wilson captures the simplistic beauty and serenity of Nemoto’s surroundings while exploring the pains and anxieties of both himself and his patients. The cinematography breathes an effortless and clean linearity in the simplicity of interior spaces and nature alike. Wilson presents beautiful, striking images of Nemoto’s retreats, especially The Departure. Candlelit faces and illuminated bodies dancing in the nighttime transport us to another world, one of natural silence and mental noise. The viewer experiences the images, music, and words as if he or she were there.

Rather than use talking heads to relay information, Wilson lets Nemoto’s work speak for itself. Eliminating excess narration allows emotions — pain and sorrow especially — to breathe. There are no barriers to distance the audience from the very palpable experiences unfolding on screen. Nathan Michel’s haunting, unassuming score places us even closer spiritually to these experiences. We feel we are dancing with Nemoto at the club, the colored lights playing across our faces like undulating waves. At moments, the camera stands still in order to capture the quiet movements of the everyday like the planting of rice, a child at play, or even simply the fall of rain at the temple’s entrance.

Wilson’s cinematography paired with both Nathan Michel’s haunting score and the experiences of the people make The Departure a truly moving piece of work. Lulling scenes of calm mix with the pain-stricken faces of patients and Teppei’s bursts of energy to offer us a close-up and genuine view of life. The absence of barriers make for a compelling, spellbinding film that invites the viewer into this world, and wills her to understand the pain felt so palpably by these people.

Top Photo: Nemoto takes a nighttime walk through the city.

Bottom Photo: Patients on retreat participate in an exercise.

Q: Does The Departure pass the Bechdel-Wallace Test?

The film focuses solely on Nemoto and his patients which leaves little room for conversation between women.