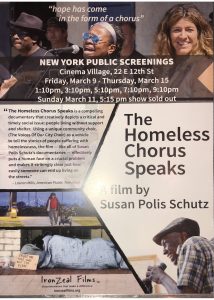 A film by Susan Polis Shutz, The Homeless Chorus Speaks, currently playing a Cinema Village, is a soul-touching documentary that tells the stories of The People’s Choir – a choir made of people whose lives have led them to the streets of California. (FEA 5/5).

The documentary is structured in a traditional but effective way, which switches from one interviewee to the next — allowing each person to reveal more and more about their lives as the film progresses. It focuses on a rather diverse group of people who come from different parts of the country, people whose difficult lives led them to the streets. Their stories emphasize the idea that one’s socio-economic affluence is not permanent; the comforts of “home” can disappear overnight. The Homeless Chorus Speaks focuses on humanizing the homeless, a group that has been alienated by the for-profit priorities of the current capitalist economy (which extends little to no support to those who cannot afford it leading people to live and even die on the streets).

The most poignant aspect of The Homeless Chorus Speaks is its emphasis on music. Centered around a choir for the homeless, the overarching theme of the film is that of music — and especially singing — has the ability to suspend all woes and allow both performers and audience members to live in the moment, captivated by the flow of the lyrics and the melody. The interviewees all point to a specific song that transformed them, which the choir regularly takes the time to perform collectively, making the piece even more powerful.

There are very few moments of silence in the film, which is overtaken by the power that exists in The People’s Choir, not just through their individual talent, but also through the weight and significance that each performance carries with it. The choir differentiates itself from any other group in that its members are there to tell their stories, to speak (as the title of the film suggests), and also to have their voices heard by one another. The individual members had been stripped of their sense of belonging and their opportunities until the foundation of the choir, which gave them a sense of community in a world that typically forces them to be alone.

Even though its primary goal is to raise awareness about the choir — and the film does this so wonderfully — The Homeless Chorus Speaks also conveys a more powerful message: in around one hour, it is able to instill within the viewer a certain veneration for the homeless who endure struggle on a daily basis, both internally and externally. It is a reminder that not all homeless people are “lazy drug-addicts,” who do not have enough motivation. It is also reminder that America is not as readily available and helpful to its citizens as one is lead to believe. It is a reminder to be kind, and to offer assistance when needed, just like the founders of the choir.

In the simplicity of its structure, and the heaviness of its subject, The Homeless Chorus Speaks is the perfect example of a film that transcends the screen and reminds the viewer of the humaneness of those that coexist in their world, regardless of their background or situation.

Bottom Photo: Two members of the choir, who reveal their stories in the film.

Does The Homeless Chorus Speaks pass the Bechdel-Wallace test?

There are many interviews with homeless women who share their stories.