Love and Bananas takes you along to an elephant sanctuary in Cambodia and on the rare and often dangerous journey to rescue an elephant from a trekking farm. Experience the tragic fate of Asian Elephants and the immense love of those working to save them through the lens of Ashley Bell and her crew. Education is the first step to save a species, and Bell exposes the audience to all the heartbreak and hope that comes along for this ultimately heartwarming journey. (HM: 3.5/5)

Director Ashley Bell (previously known for her role in The Last Exorcism) first traveled to Elephant Nature Park in Thailand years before the exciting elephant rescue. The park is a sanctuary for elephants previously the victims of exploitation by the tourist and service industries. Here we meet Lek Chailert, who was named TIME Magazine’s Hero of Asia (2005) for her daring work to end abuse in elephant trekking farms.

Every single elephant on Lek’s reserve was rescued from the trekking industry. Between cruel practices like Pajan (the “crush box,” a form of emotional abuse to separate baby elephants from their mothers’ influence) and mass habitat loss as a result of deforestation, elephant populations around the world are rapidly falling. Even with the brave work of those fighting to protect these beautiful animals, elephant rescues are extremely rare. With the dim hope we are given by the good work of the people at Elephant Nature Park, we go home to the United States with Bell to await the next opportunity to return to Thailand for an elephant rescue.

And suddenly, a couple of years later, the day arrives. Lek summons Bell and her crew to pack off again to Thailand. When we arrive, she explains to us the dangers of an elephant rescue. The rescue crew have to drive 400 miles through the night to a trekking farm, where they will meet the owner of Noi Na, the elderly female elephant they are determined to bring back home. 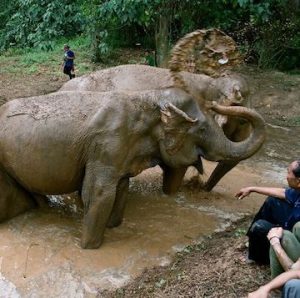 The rescue is without challenges even from the beginning. The owner might decide to back out, or the elephant may be too sick to travel. Not to mention the difficulty of transporting Noi Na from the trekking camp and all the way back to the reserve: terrified elephants don’t  walk onto trucks willingly. Once Noi Na is secured in the truck, their problems really begin, and the danger becomes very real.

Bell and her crew do a great job of bringing us into the experience of the trip in all its moments of ecstasy and turmoil. With simple, classic editing and cinematic style, pretty much every element of a good documentary is employed to tug at our hearts with the pain of the elephants’ story, and to make the message really stick with the audience: the elephants have to be saved. There is no shying away from the reality of what these elephants go through, and between this horror and the stress of watching the actual elephant rescue itself I was anxious for most of the film.

But this stress is rewarded with the joyful spirits brought by the elephants that have been rescued and the heartwarming overarching story of the whole documentary. Of course, the joy brought by watching the elephants live happy, healthy lives on the sanctuary easily makes it worth the watch. In the end, despite the hardship along the way, I was left with an overwhelming sense of hope for the cause and a motivation to spread the message. Although there is nothing special about how the documentary was done, Bell allows the story to shine for itself, and that alone makes it worth the watch. 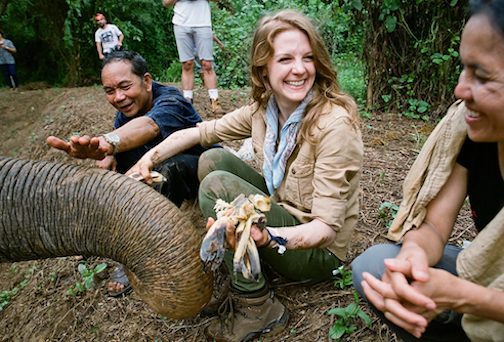 Top Photo: Lek Chailert and one of her elephants.

Q: Does Love and Bananas pass the Bechdel-Wallace test?

Bell and Chailert, both women, are the main human role-players in this story, and their conversations are all about the elephants.