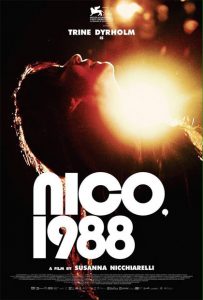 Nico, 1988 follows the eponymous artist’s last year of life as she tours through Europe, and reveals the characters and events that framed her final days. Director Susanna Nicchiarelli strays away from factual information about Nico’s life, and instead explores the relationships and emotions that remained with her till the end. Whether or not you are a fan of her music, the empathy with which the characters and events are portrayed makes it worth the watch. (HM: 3.5/5)

Christa Päffgen, better known by her stage name Nico, was an artist who first rose to fame as a Warhol era superstar in the 1960s. In Nico, 1988 we experience the final year of her life while she tours throughout Europe. She is haunted by the past, struggles with a heroin addiction, grapples to reconnect with her troubled son, and is forced to work against the legacy of her career with the Velvet Underground. However, the scope of the film goes beyond her as an individual, as it also explores the relationships that defined the events of her final tour and provided a frame for her life.

Instead of attempting to punctuate the film with facts about Nico and famous events from her life like conventional biopics, Susanna Nicchiarelli embraces the story of the final year of her life fully, allowing history and personal information to be revealed naturally. The weight of the events that take place, combined with beautiful, simple cinematography, allows the characters’ passion to center our experience of the film. Vague and brief flashbacks to her childhood and young adulthood with Andy Warhol and The Velvet Underground are employed to reveal the emotions and trauma from the past that still defined her life 20 years later, exploring the ways in which the past continues to affect who we are.

Although all the acting is stupendous, the standout element of this film is Trine Dyrholm, who portrays Nico. She is almost unrecognizable in thisrole, taking on the personality of the artist compassionately and completely, even singing some of Nico’s solo music for the film. Her performance is authentic and immersive, conveying all the complexities of Päffgen as deeper than an iconic musician, a label that many people failed to look past while she was alive.

If you want to know more facts about Nico’s life and career, or are only interested in her time with The Velvet Underground, this is not the film to watch. But if you want to get to know her on a more personal level, this film is the vehicle to do that, and you may even recognize a little of your own self in her experience. Nicchiarelli clearly created it out of a love for Nico, shown through the lack of analysis and emphasis on compassion, and because of this, Nico, 1988 goes beyond the traditional biopic to something explorative of how life and relationships create who we are.