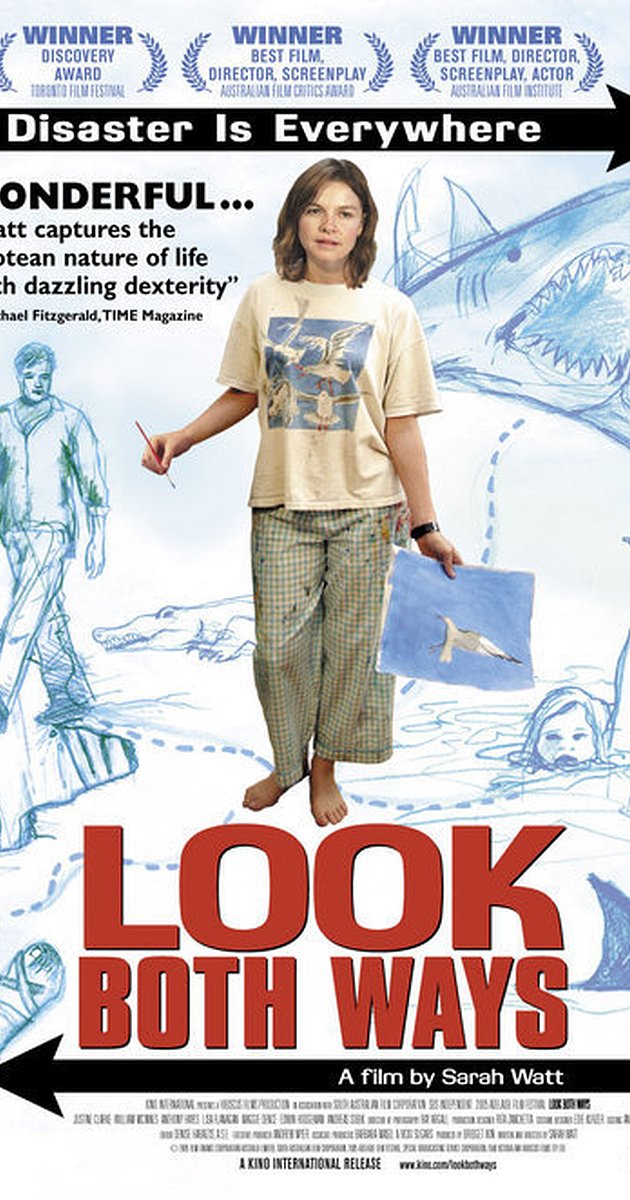 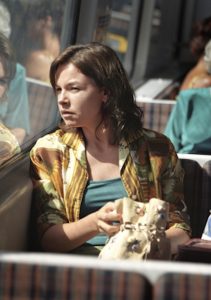 Australian drama Look Both Ways is a down-under version of American Oscar-winner Crash, but its polar opposite in every way–subtle where Crash is bombastic, true to the little moments of real people’s lives where Crash manufactures big moments of melodramatic overstatement. Yes, disease and death are the elements around which writer/director Sarah Watt builds her narrative, but something magical happens in the telling: instead of doom and gloom, Watt somehow creates one of the most life-affirming films of the year. (JLH: 5/5)

Look Both Ways opened in the U.S. on April 14, 2006. It won 20 awards and 16 more nominations in six countries and the European Film Awards.

In the opening moments of the terrific new Australian film Look Both Ways, an artist named Meryl (Justine Clark) witnesses a train accident. Meryl is already in a dark mood. Two weeks earlier her father died suddenly with no advance warning, and heading home from her mother’s house, where she’s been since his funeral, Meryl’s mind is filled with dreadful images. When the police question her, she must struggle to focus. She knows she did not imagine the accident. She saw a man playing with his dog, and that man is now dead.

Two journalists arrive, a reporter named Andy (Anthony Hayes) and aphotographer named Nick (William McInnes). Although they’ve nevermet before, Nick is Meryl’s neighbor, so they leave the scene together, each of them pretending to engage in normal conversation despite the tragedy that’s brought them together. But like Meryl, Nick is primarily absorbed in a personal shock of his own; he’s recently been diagnosed with testicular cancer.

These are the elements, death and disease, around which writer/director Sarah Watt builds her narrative. But something magical happens in the telling: instead of doom and gloom, Watt somehow creates one of the most life-affirming films of the year.

Look Both Ways is a down-under version of Crash, and its polar opposite in every way: subtle where Crash is bombastic, true to the little moments of real people’s lives where Crash manufactures big moments of melodramatic overstatement. The characters in Crash are enraged by their circumstances. The characters in Look Both Ways understand that, as residents of the “first world,” their personal catastrophes are simply the stuff of life. There are only two options: draw comfort from your connection with those around you or live in lonely misery.

Like her heroine, Watt studied art but failed to make a living as apainter. Meryl takes the practical step of working for a greeting card company. Watt turned to animation. Her breakthrough came with the 1995 animated short Small Treasures which won the OCIC Award at the Melbourne International Film Festival (given to “the most outstanding Australian film [of the year] promoting human values”), and went on to win the “Baby Lion” for Best Short Film at that year’s Venice Film Festival. Clocking in at 15 minutes, Small Treasures is the story of Jane (voiced by Rachel Griffiths) who is pregnant with her first child. Like Meryl, Jane sees danger
everywhere, but she still embraces life with all its inherent tragedy. Jane is clearly Meryl’s precursor.

One of the most welcome features of Look Both Ways is its sexual balance. In addition to Meryl, Nick, and Andy, there are three more primary characters, Anna (Lisa Flanagan), who is Andy’s pregnant girlfriend, the widow of the man killed in the accident (Daniella Farinacci), and the man who was driving the train at the time of the accident (Andreas Sobik). These six individuals are surrounded by a rich ensemble of colleagues, family members, and friends, comprising a cross-section of Adelaide (located near the center of Australia’s southern coastline) but representing small “first world” cities everywhere. 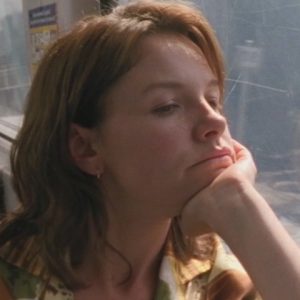 Andy and Anna are the most verbal characters in Look Both Ways, and as they make their big decisions (keep the baby? stay together?), they have the most amount of dialogue. Meryl and Nick are both more visually than verbally-oriented, and that’s the first thing they come to appreciate about each other. The morning after the accident, Nick, out for an early run, rescues one of Meryl’s rejected watercolors from her trash bin at almost the same moment Meryl is scrutinizing Nick’s photograph of the accident scene (which dominates page one of her local newspaper).

Meryl’s vivid inner life is depicted in fluid animated sequences. She doesn’t just imagine disasters. A trip to a local swimming pool with her girlfriend finds her gliding past reefs and brilliantly-colored tropical fish with her mind’s eye. Nick, on the other hand, runs through huge stacks of still photographs in his mind. They provide background on his extensive travels as well as insight into the systematic research he does when he learns about his condition. These staccato collages also add an element of suspense. Does Nick have the capacity to connect dots?

The obvious message of Look Both Ways is that there are no easy answers for any of us. There is no way to make our parents, friends, or family immortal. There is no way to keep our children safe. There is no way to protect ourselves from death’s inevitability. Whether the end of one specific life is caused by disease, accident, or whatever, at some point, every life will end.

In itself, this is trite, of course, but Watt’s message comes at a critical time. Westerners in general, and Americans in particular, have been so traumatized by terrorism since 9/11, that we’ve willingly traded precious civil liberties in the attempt to make our world safer. Watt insists that we face the truth. The more we attempt to protect ourselves, the more we cripple ourselves, making the life we actually have less worth living. It’s a difficult message to fully absorb, but it’s the message that we most need to hear right now. 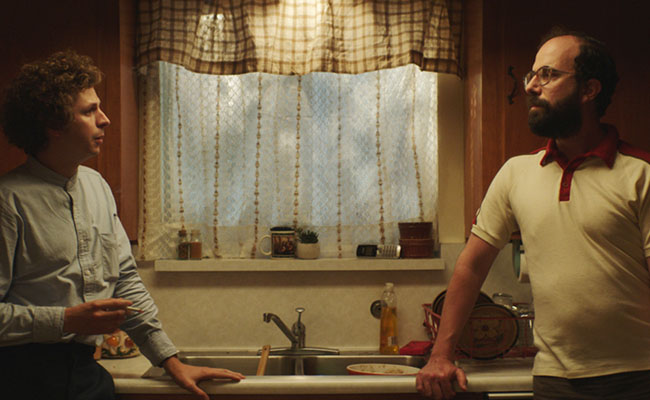 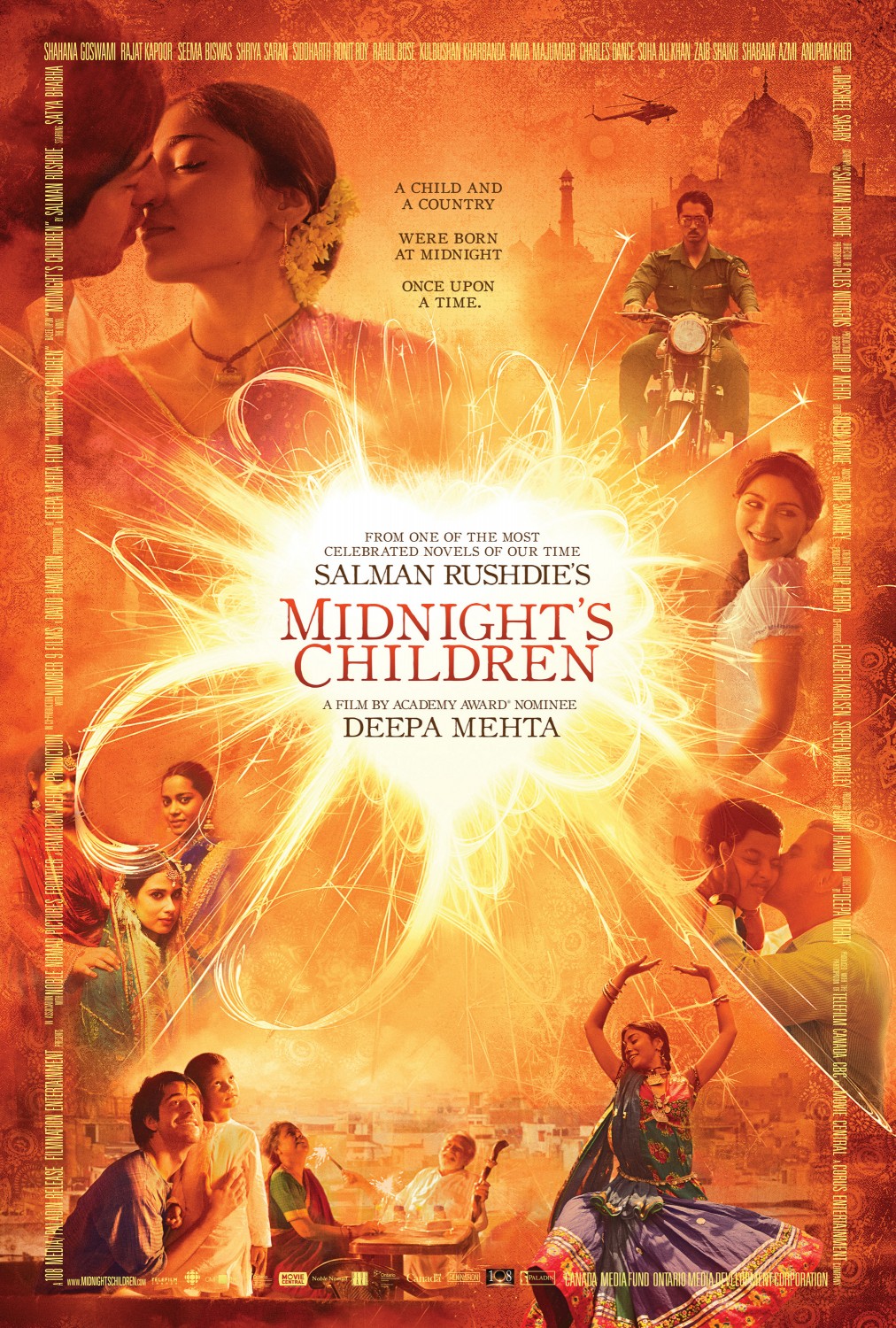