Oh, no, not ANOTHER vampire movie!

And yet with Moira Buffini adapting her own play & Neil Jordan at the helm, Byzantium–lush romantic & heart-breaking–is a must see!

Two “sisters” are adrift in a seedy coastal town. 20something “Clara” (Arterton) does what she must to keep them alive while teenage “Eleanor” (Ronan) suffers with the daily consequences. (JLH: 4/5)

Click HERE for our FF2 Haiku. Byzantium is highly recommended for the “art house” crowd!

“Another vampire movie,” I said to myself with a heavy sigh when I read the description of Byzantium on IMDb (the Internet Movie Database). But then I read on: directed by Neil Jordan with a screenplay by Moira Buffini… Mmmm…

From Mona Lisa in 1986 to The Crying Game in 1992 (his Oscar-winner) right through to the sad, lovely, underrated Ondine in 2009, Neil Jordan has long been one of my favorite directors, and though I haven’t loved all of his films, I’ve certainly made the effort to see them all. So I kept reading…

Turns out Byzantium is one of the few films Jordan has directed but didn’t write. And when I realized the screenplay had been written by Moira Buffini (creator of the screenplay for the most recent adaptation of Jane Eyre) and I saw that Buffini was adapting one of her own stage plays, Byzantium leapt to the top of my watch list and became a “must see.”

How sorry I am now for the people who will only see Byzantium on a small screen (either on DVD or On Demand). Shot in location, Byzantium artfully blends footage from Hasting in East Sussex (on the English Channel) with footage from Beara in West Cork (on the Atlantic Ocean) to create a gorgeous British/Irish tableau of old and new.

As the camera swoops down into the secret recesses of seedy towns on rocky coasts, we meet “Clara” (Gemma Arterton) and “Eleanor” (Saoirse Ronan). Clara, who appears to be in her mid 20s, tells everyone that teenage Eleanor is her sister, but the intensity of their relationship immediately conveys something much deeper. In fact, Clara is over 200 years old, and Eleanor is Clara’s daughter!

Imagine spending decade after decade living by your wits? But Clara is determined. Were it not for Eleanor, she might have given up long ago, but maternal ferocity propels Clara from one narrow escape to another as their days together turn into centuries.

Chasing Clara and Eleanor hither and yon are “Savella” (Uri Gavriel) and “Darvell” (Sam Riley). As members of “the Pointed Nails of Justice,” they are expected to be ruthless, but Darvell remembers who Clara was before she became a vampire, so he tracks her with a little bit of sympathy and a fair amount of awe. Darvell is also attentive to the evidence left behind at each new kill site, so he instinctively knows which victims have been dispatched by Clara versus those who have succumbed to Eleanor.

Clara finds respite at a shabby old hotel bequeathed to a nebbish named “Noel” (Daniel Mays) by his now dead mother. Despite his better judgment, Noel invites them to stay, and once they move in, Clara quickly has Noel locked tight in the palm of her hand. Eleanor also relaxes a bit, begins a tentative relationship with a pale young man named “Frank” (Caleb Landry Jones), and even starts taking writing classes. And as their heroines lay low, Buffini and Jordan use this pause in the action to fill in their backstory.

Had there been one false note in either performance, Byzantium might well have imploded, but Gemma Arterton and Saoirse Ronan hold us transfixed. Arterton has the showy part; her Clara is dark and dramatic, always alert and clinging to each moment of life by sheer force of will. Ronan, by contrast, keeps Eleanor physically constrained and emotionally contained. The look in her eyes is so otherworldly that it’s easy to believe desperate people will mistake Eleanor for an angel from above.

At long last, when all the pieces are finally in place, the characters in Byzantium make a mad dash to an orgasmic finale that had been foreshadowed but still made me shiver from head to toe. Wow!

PS: Here’s a gorgeous photo of the real “Hungry Hill Waterfall” on the Beara Peninsula where Neil Jordan shot his soul-stirring grand finale 🙂 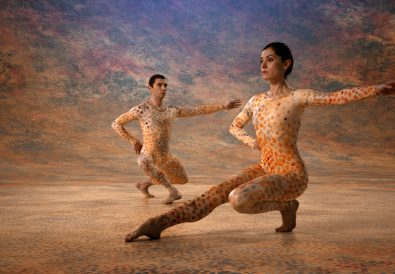