A Romanian Ethnologist (Mathieu Amalric) is called to a hospital in Topeka, Kansas (home of the world-famous Menninger Clinic) to treat a troubled Native American WWII Vet (Benicio Del Toro).

Jimmy P is based on a real case study by George Devereux that was published in English in 1951 (Reality and Dream: Psychotherapy of a Plains Indian) & helped transform post-Freudian Psychoanalysis. But while Jimmy P is clearly a labor of love for French director Arnaud Desplechin and his co-writers Kent Jones & Julie Peyr, they expended precious little effort figuring out how to tell this story. So despite the fact that it revolves around two very interesting men played by two excellent actors, their narrative is a failure.

The frame is clear enough. In the final days of WWII, “Jimmy Picard” (Benicio Del Toro), a Blackfoot Indian, is injured during military service in Europe. When he returns home to his family ranch, he suffers debilitating headaches & periods of near catatonia. A few years pass before his sister “Gayle” (Michelle Thrush) finally arranges to take Jimmy to the US Army’s premiere psychiatric facility in Topeka to see if they can cure him.

Once in Topeka, Jimmy is run thru a battery of physical & psychiatric tests, but no one can find anything wrong with him. After consulting with his Topeka colleagues, “Dr. Karl Menninger” (Larry Pine) begins to wonder if Jimmy’s problems might possibly have cultural dimensions. So much like a magician, Menninger reaches into his hat & summons forth a weird little fellow named “George Devereux” (Mathieu Amalric).

Menninger tells Devereux that the US Government will pay for him to conduct one session per day with Picard, so George & Jimmy begin a series of chats which start with “Tell me about your family.” George soon reveals that he spent several years living with the Mojave Indians & he wants to do some compare & contrast. “The Mojave Indians call this relationship &%$#@; what do the Blackfoot Indians call this relationship?” Jimmy gives him the term as requested & George writes it down–presumably phonetically–in his notebook.

When they are not in session, Jimmy (who has been released from a locked ward for schizophrenics & given a private room for the duration of his treatment) loafs around the hospital & sometimes goes into town. Meanwhile George, who has been given his own private cottage, types up his notes & ruminates, pausing to entertain a mysterious woman apparently well-known to Menninger but never fully identified for the audience.

Therapy continues for an annoyingly indeterminate time span, then, once it is over, Menniger asks Devereux if he is satisfied with the treatment. George shrugs & says something to the effect that he can’t hold himself responsible for the way Americans treat Indians.

This was the last straw for me. Without giving away the details of Jimmy’s therapy sessions, let me just say that–in context–the US Government has being extraordinarily generous with the management of Jimmy’s symptoms. They know from the beginning what we only learn towards the end–Jimmy never saw combat, so neither his physical injuries nor his psychological disabilities are combat-related. Yes Jimmy is suffering from something, but…

It’s this kind of lazy screenwriting that dooms Jimmy P as a drama. Desplechin, Jones & Peyr expect us to know who Dr. Karl Menninger of the Menninger Clinic was, & they feel no need to explain how he knew Devereux, why he thought Devereux could help his patient, or how he managed to pay for any of this. Devereux’s back story is piteously thin with some perfunctory, never explained Holocaust references & some oddly-placed Judaica (e.g., an Israeli flag above a piano, a Hebrew eye chart). A few minutes on Wikipedia will tell you the basic facts of George Devereux’s life, so why be so coy about it? It’s hard to care much about a rabbit after it emerges from the magician’s hat. It’s white. It’s cute. So what?

I am the perfect audience for Jimmy P. I am someone sincerely interested in all the topics it claims to cover such as Native American history, Post Traumatic Stress Disorder, & Psychoanalysis. But other than offering me the opportunity to troll around Google afterwards, I learned very little about any of this while actually watching Jimmy P. I am someone who loves Indies & foreign films, but I had a hard time staying awake. I went into the theatre wanting love Jimmy P, but I found it oblique, confusing & worst of all tedious. Bummer! (JLH: 3/5)

Q: Does Jimmy P pass the Bechdel Test? No.

While there are some women characters in Jimmy P, they all have peripheral roles & no interactions with one another. 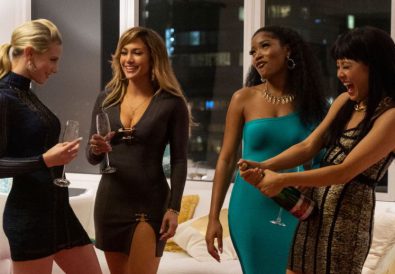 ‘Hustlers’ is a Powerhouse of Social Critique and Female Friendship