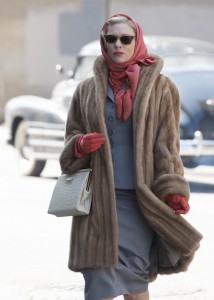 Director Todd Haynes and screenwriter Phyllis Nagy have made a new film that is all parts but no whole. Based on Patricia Highsmith’s semi-autobiographical lesbian romance The Price of Salt, Carol has impeccable production values, but perfunctory character development and a predictable plot.

And even though the Supreme Court recently affirmed Gay Marriage in the USA, the whiff of pedophilia underlying all the gorgeous imagery still reeks. (JLH: 3/5)

Todd Haynes’ new film Carol is something of a sequel to his Oscar-nominated film Far From Heaven (released in 2002). In Far From Heaven, Julianne Moore played an upscale woman who appears to be living a perfect 1950s life–beautiful home, handsome husband, adorable children–but it is all an illusion. Her husband is a closeted gay man. “Conversion Therapy” doesn’t work. Her neighbors refuse to accept her budding relationship with an African American gardener. And so, in the end, “Cathy Whitaker” is stuck in Connecticut–by herself–just as surely as America was stuck in the Eisenhower Decade.

But even though Far From Heaven received four Oscar nominations and swept the 2003 Independent Spirit Awards, Richard and I were lukewarm. We both rated it 3.5/5 and posted this haiku: “In a good Alfred Hitchcock homage, you’ll get the chills. Similarly, in a good Douglas Sirk homage, you should cry. Why didn’t we? Maybe because this story of forbidden love in 1950s suburbia was just a bit too “done” — every object just so, every hair in place. More mind than heart?”

Ironically, twelve years later we felt exactly the same way about Carol (which is now considered one of 2016’s top Oscar Bait contenders). Societal attitudes have changed so much in the interim that Haynes allows himself to give his new story of lesbian lovers something of a happy ending. After all, even the Supreme Court–in the midst of rolling back voting rights and continually narrowing a woman’s right to choose–has affirmed Gay Marriage, and LGBT characters are fully accepted in Popular Culture.

And yet Carol left me icy cold. Great performances by name actors rolling in luxury onscreen–with huge amounts of money clearly spent off screen for top talent in all the technical categories–couldn’t hide the holes in the predictable plot or the barely perfunctory character development. 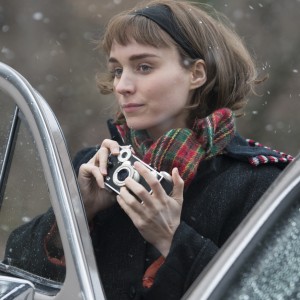 A very beautiful–and very young–woman is working in the toy department of a upscale department store during the Christmas Rush. Another very beautiful woman magically appears one day, looking for a gift for her daughter. Woman #2 is much older than woman #1, and woman #2 is clearly very wealthy (which woman #1–fidgeting behind her display counter–is obviously not). Woman #1 is mesmerized. Woman #2 is first flattered and then flirtatious.

Woman #2 tells Woman #1 that she is looking for a gift for her daughter. “What did you want when you were a little girl?” “A train set.” Woman #2 chuckles, orders the most expensive train set on the floor, writes her name and address on the delivery slip, and glides away wrapped in her full-length mink coat… The scent of fine French perfume lingers in the air when suddenly Woman #1’s reverie is broken… Woman #2 has “forgotten” her expensive leather gloves!

But wait, Woman #1 (who we now know as “Therese”) has both a name and an address for Woman #2 (who we now know as “Carol”). It’s all right there on the delivery slip. Thus, a relationship between them becomes inevitable. After all, what is poor Therese to do? Save the gloves as a memento? Of course not. She returns the gloves. Carol reciprocates. Game on.

This initial encounter is extremely seductive–just as it is intended to be–but I must admit that it made me queasy. In the hour plus that follows, we are given precious few background details about Therese and Carol. Most important, we have no idea how old they are.

In fact the age difference between these two actresses is not prohibitive. Therese is played by Rooney Mara who is now 30, and Carol is played by Cate Blanchett who is now 46. But Todd Haynes has decided to make “Therese” look extremely young, fragile and innocent, whereas he has made “Carol” look old and jaded. So what I saw onscreen was not a lesbian romance (which would have been just fine with me); what I saw onscreen was a pedophile stalking her prey (which is not “fine” with me–not at all–not with any pair of people in any combination of genders).

Carol acts like a wily old cat toying with her mouse, baiting Therese with her wealth and her wit.

When Carol slyly mouthed “Like the hat!” (the little Santa’s Elf cap which we already know Therese finds humiliating), I literally cringed and shuddered in my seat. Nothing that happened after that initial encounter surprised me, moved me, or ameliorated my totally spontaneous physical reaction of pure disgust.

It goes without saying that Carol moves as quickly as it can from Therese’s world into Carol’s world–a phantasma of WASP privilege filmed with adoration by cinematographer Edward Lachman (who received an Oscar nomination for his work on Far From Heaven). And once again, Sandy Powell–nominated for 10 Oscars and already winner of 3–makes an essential contribution with her costume design. Since she won an Oscar for The Aviator–in which she dressed  Cate Blanchett for her Oscar-winning role as Katherine Hepburn–Powell’s Oscar nomination for Carol is an obvious no-brainer.

But alas, composer Elmer Bernstein (also Oscar-nominated for Far From Heaven) died in 2004, so Haynes has replaced him with Carter Burwell. Burwell (who is best-known now for his work with the Coen Brothers) has never been nominated for an Oscar, but I would have given him one in 2005 for his work on Kinsey. So I will be happy if he is recognized for his work on Carol (which is also quite good).

So much for the idea that I always root for women filmmakers just because they are women. I don’t. I won’t. If Phyllis Nagy is nominated, I will not cheer… even if she wins. For me, that would be like voting for John McCain just because he picked a female running mate. I didn’t support Sarah Palin then; I won’t support Phyllis Nagy now. The end.

Top Photo: Cate Blanchett as “Carol” = a predator on the hunt.

Middle Photo: After Carol buys her an expensive new camera “for Christmas,” Rooney Mara as “Therese” takes photos of Carol which open up future employment opportunities for her at the New York Times. Oy! Dream on, Therese! Dream on!

Almost every scene in Carol is gynocentric.

Of course there are some men in Carol and some of the conversations are kinda sorta about them. Specifically, Carol complains to Abby about her husband “Harge” (Kyle Chandler).

But none of the men play believable characters; they are simply onscreen to move the plot along (minimal as it is).

Therese has a boyfriend named “Richard” (Jake Lacy) but she doesn’t love him. It’s the 1950s, so sex really isn’t an issue. Richard wants to marry Therese (in part so he can have sex with her) but Therese is clearly a virgin when Carol seduces her.

Richard has a friend named “Danny” (John Magaro) who is also in love with Therese. When Richard and Therese break-up, Danny–who works at–d’uh–the New York Times–offers himself as Richard’s replacement… And that’s how Therese ends up with a job at the New York Times… Say what?!?

Most egregious of all is “Tommy” (Cory Michael Smith), some guy Carol and Therese meet up with on their little road trip. He claims to be a traveling salesman but if I could see through him right away, why couldn’t Carol?

So let me say it one final time:  Predictable plot. Perfunctory character development. THE END 🙁

After posting this negative review of Carol, I went back to read Patricia Highsmith’s semi-autobiographical novel The Price of Salt… Surprise! I loved it! Turns out that all the things that made me dislike Carol so much are definitely not to be found in The Price of Salt.

The Therese character in The Price of Salt actively pursues the Carol character. Carol neither leaves her gloves on the counter, nor does she buy a totally unsuitable train set for her daughter Rindy in order to please Therese. In fact, the Carol character in The Price of Salt is sad and a bit befuddled. Therese falls in love with Carol immediately, but Carol takes some time to notice it. At first she treats Therese more like a substitute daughter than a potential lover.

Carol is not a predator in The Price of Salt; Carol is the object of Therese’s love. And Highsmith makes it abundantly clear that Therese lusts after Carol, not her money, her stuff or her style. Were Carol to find herself totally bankrupt after her divorce from Harge, Therese would likely love her all the more.

Thankfully, I am not the only one concerned about all this. Click HERE to read an insightful article by Patricia White:

“Rather than offer us psychologically rounded lesbian characters, the movie Carol activates cinematic stereotypes for its own seductive purposes. At the heart of the romance is an intergenerational seduction fantasy. While the film renders this tastefully, there is no mistaking Carol’s kinship with predatory lesbians…”

While Patricia White’s overall response to Carol is more positive than my own, her evidence–see photos in her article–help make my case. 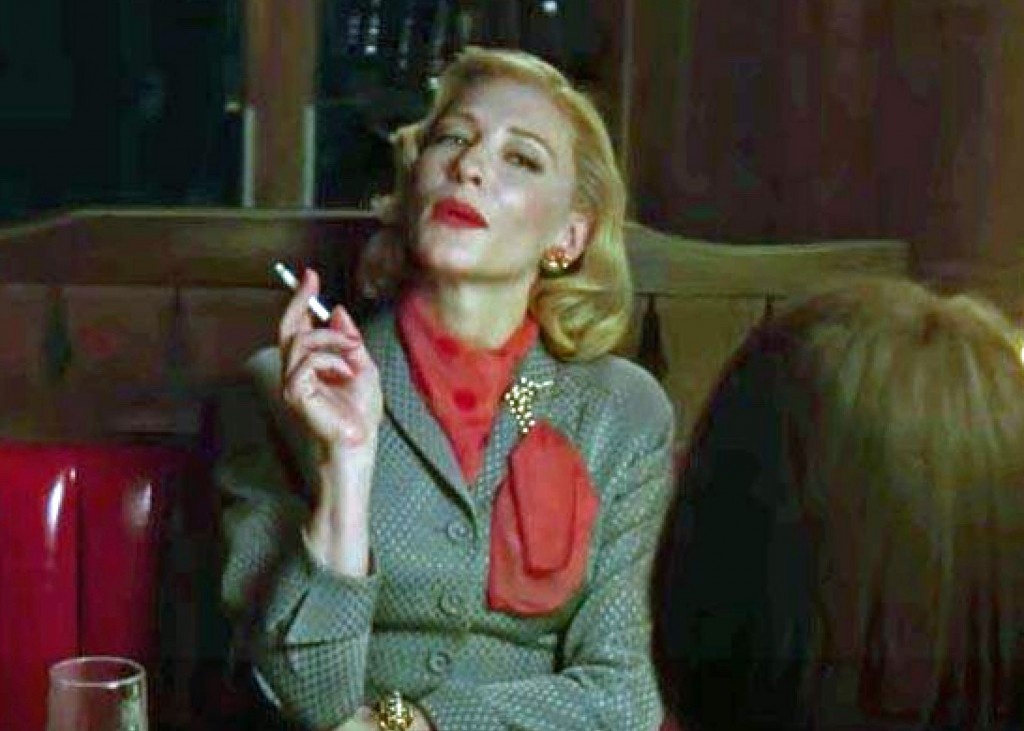 For all that I champion women filmmakers, if Carol receives an Oscar nomination in the Best Adapted Screenplay category on 1/14/16, then I will cry just that much more on what is already looking to be another Very Bad Day for women filmmakers 🙁 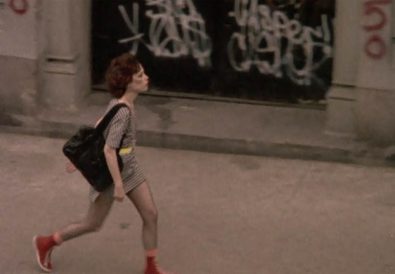