In a tender reimagining of Antoine de Saint-Exupéry’s The Little Prince, director Mark Osborne and writers Irena Brignull and Bob Persichetti bring us an entirely new protagonist, a “Little Girl” (voiced by Mackenzie Foy), who is captivated by the Little Prince’s classic tale. As the Little Girl figures the story out for herself, Saint-Exupéry’s poignant philosophies unfold in the Girl’s own story within Osborne’s gorgeously animated world. (AEL: 4/5)

The “Little Girl’s” (Mackenzie Foy) city is gray and uniform, the adults severe, and the children pale and uptight. When the Girl botches an admissions interview at her dream private school, her uptight single “Mother” (Rachel McAdams) is undeterred. Mother moves the family to a home in a more expensive neighborhood, where all resident children can go to the private school if they can afford it.

Mother has big dreams for her daughter, and in order to reach them she’s working to turn her small daughter into a high-achieving superhuman. With only a summer until the Little Girl’s first day at her new school, Mother has created a “Life Plan” detailing the girl’s activities in ten-minute increments, not only for the upcoming summer, but for the rest of her life.

The Little Girl is a diligent worker at first, but she is soon distracted by the antics of her neighbor, an elderly “Aviator” (Jeff Bridges). While other adults in the Girl’s life work in finance and live in identical white houses, the Aviator seems to inhabit another world, hiding out in his topsy-turvy house and repairing his airplane. When a stray propeller from the Aviator’s yard literally knocks the pieces of the Girl’s Life Plan from the wall, she is immediately captivated by the Aviator and his imaginative ways.

The Aviator gives the Girl a handmade book, a story he says nobody else understands. His artwork is immediately recognizable to us from Saint-Exupéry’s The Little Prince. In the story, the young Aviator meets a clever and curious “Little Prince” (Riley Osborne) from another planet.

From the book, a new animated world develops, as the Little Prince tells the Aviator about the whimsical array of characters he’s met in his interplanetary travels. He’s met a “King” (Bud Cort) who commands the sun to rise, a “Conceited Man” (Ricky Gervais) who wants to be applauded constantly, and a “Businessman” (Albert Brooks) with a seemingly useless habit of counting the stars. “Adults are certainly very odd,” proclaims the Little Prince. The Little Girl reading in her room at night, head full of the Prince’s colorful adventures, agrees. 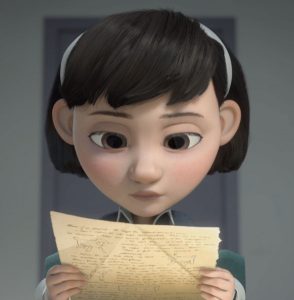 Throughout her summer of preparation for school, the Little Girl secretly enjoys her Little Prince story and her friendship with the Aviator. Gradually the Little Prince’s discoveries and bits of wisdom make her wonder whether growing up really has to be as rigid as her mother believes. In some of the story’s most poignant moments, a “Rose” (Marion Cotillard) teaches the Little Prince how difficult love can be. A “Fox” (James Franco) teaches him that once a person “tames” another, they are no longer strangers, but meaningful to each other forever. When the Little Prince lets the “Snake” (Benicio Del Toro) and his poison send him back home to his Rose, the Little Girl is suddenly afraid. She wants to know what happened to the Prince, and what happens to people when they grow up and get old. For the first time, the Aviator’s answers aren’t satisfying to her.

When the Aviator falls sick and is admitted to the hospital, the Little Girl decides to take her questions into her own hands. She finally gets the Aviator’s plane started, and she flies away from her neighborhood to find the Little Prince and discover what happened to him. She arrives at a small planet covered in city buildings, run by the tyrannical Businessman. Children are forbidden on this planet. Adulthood seems to her to be a dark and monotonous experience, and the Little Girl has to figure out a way to keep childlike wonder alive.

If there were one improvement to this film rendition of The Little Prince I’d like to see, it would be the fact that this adaptation simplifies the original story. The image of the dystopian city planet where the Little Girl arrives, filled with nearly brain-dead adults slaving for an all-seeing capitalist, is certainly relevant, but it erases so many of the Little Prince’s more poignant questions about compassion, imagination, and death.

This reimagining of Saint-Exupéry’s story is sensitive and beautifully crafted. The Little Girl and her Mother make a compelling pair for this modern update, especially because the Mother is not one of the frightening allegorical adults from the Little Prince’s story, but a loving and complicated figure. The old Aviator and his faith in the Little Prince after so many years are probably the movie’s best application of the book. He shows us what the story can mean to real people living lives that can be mundane and heartbreaking, and how to believe in the Little Prince after he’s gone. 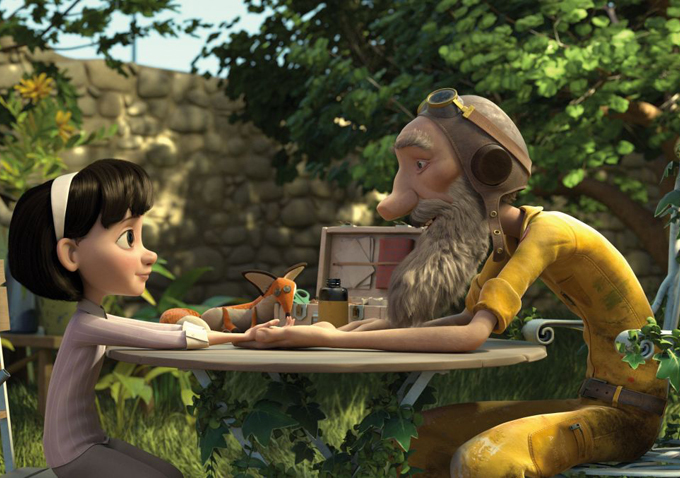 Q: Does The Little Prince pass the Bechdel-Wallace Test?

The little girl and her mother argue a lot at first, because the mother’s ambitions for her daughter are suffocating. The evolution of their relationship is very sweet and instrumental to the story’s modern update of the Little Prince’s messages.