Full Title = Fantastic Beasts & Where to Find Them 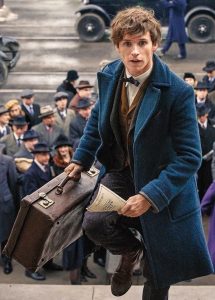 For those of us nostalgic for the Harry Potter days, Fantastic Beasts and Where to Find Them marks the highly anticipated return to the wizarding world. If you’re looking for pure entertainment, to be transported to a new, yet familiar, magical world, then Fantastic Beasts is for you. However, if you’re a champion of the world J.K. Rowling first created all those years ago, you may find some considerable loopholes and plot points that contradict the rules of a world already created. (JEP: 3.5/5)

This time around, the setting is New York City, 1926. The city is plagued by a mysterious force that leaves destroyed buildings and tunneled streets in its wake. The speculation by the Magical Congress of the United States of America (MACUSA) is that the destruction must be caused by a beast, even though beasts’ presence in the city is highly forbidden.

With trusty suitcase in hand, “Newt Scamander” (Eddie Redmayne) arrives by steamboat to New York. As the only brit in the film, Newt is an outsider, unfamiliar with the laws and protocols set forth by MACUSA. But the law forbidding beasts is no secret, and Newt’s suitcase is filled with magical creatures acquired from his travels and studies of all things beast. Newt’s true reason for traveling to the United States is not immediately clear, but he’s arrived at a time when his knowledge about beasts may be most valuable, or most feared.

Soon after arriving, Newt finds himself pulled into an anti-wizarding rally outside a bank. Distracted by the goings on, Newt fails to notice when a sneaky, greedy, platypus-looking creature escapes from his case. Causing a commotion, Newt runs after the creature, following it inside the bank in an effort to return it to his case before it causes any mayhem. Also inside the bank is “Jacob Kowalski” (Dan Fogler) a no-maj (short for non-magic, the American equivalent of “muggle”), waiting for a meeting to request a loan to start his own bakery.

Kowalski has a case similar to Newt’s, but instead of being filled with otherworldly beasts, Kowalski’s is filled with delicious cakes and pastries. Kowalski manages to get himself caught in the crosshairs of Newt’s escapades to return the beast to his case. In doing so, the cases get switched and the mayhem attracts the attention of “Tina Goldstein” (Katherine Waterston) a “former” auror for MACUSA. 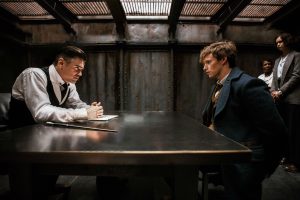 Without giving too much away, Newt, his beasts, the no-maj, and Tina find themselves working together by circumstance. The unlikely group find themselves wrapped up in one hilarious, yet dangerous, predicament after the next, to ensure that all Newt’s beasts remain safely inside his case, and to uncover the true identity of the force plaguing New York City.

Fantastic Beasts and Where to Find Them is highly acclaimed author J.K. Rowling’s first attempt at writing for film. Although some beats are missing, and the film’s pacing could be tighter, for her first screenplay Rowling has done her job. But as creator of the wizarding world, it is debatable whether or not she successfully blended the two worlds (Harry’s Hogwarts and 1926 New York City) into one. I personally found issue with the premise of the film’s “villian,” it a concept that seems to immediately refute Harry’s cupboard under the stairs days.

As the first film of a new series, Fantastic Beasts and Where to Find Them stumbles, but by no means sets Rowling’s newest wizarding adventure up for failure. Eddie Redmayne is perfectly cast as Newt Scamander, Dan Fogler successfully provides the comic relief, and Ezra Miller unsurprisingly delivers a strong performance as Credence Barebone. However, Rowling’s female characters, although holding notable positions, are lacking in character development and agency. Though, admittedly, her male characters have little development as well. With all that said, although darker tonally than Harry’s world, Fantastic Beasts and Where to Find Them is a welcomed return for old and new fans alike, to the magical wizarding world.

Q: Does Fantastic Beasts and Where to Find Them pass the Bechdel-Wallace Test?

Tina and her sister “Queenie” (Alison Sudol) speak briefly about their past growing up, but the conversation is for the benefit of Scamander and Kowalski who are seated at the dinner table with the sisters. Tina also speaks with MACUSA president “Seraphina Picquery” (Carmen Ejogo) but the same debate exists around their extremely brief conversation.