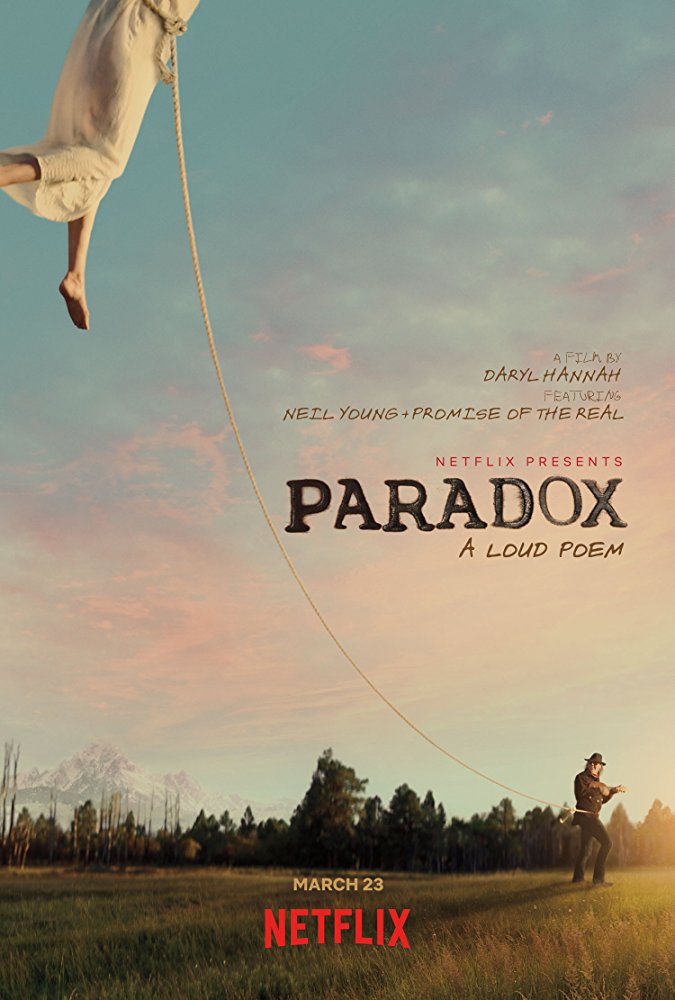 Providing an out-of-body experience with music as a guide and the countryside as a backdrop, Paradox is definitely anything but your usual film. The film defies the rules of storytelling in cinema and takes on more of an experimental performance style. Daryl Hannah directs and writes this experiential film starring musician Neil Young. (KIZJ: 1.5/5)

A transcendent song, “Show me”, opens the movie with beautiful shots of elks galloping through fallen trees, the starry skies, and “The Man in the Black Hat” (Neil Young) walking through the fields, looking out onto the horizon. A chapter heading “Time is Fluid” fills the screen, and we are plunged into unsettling electric guitar chords. As the guitar continues to resonate, a musical group of outlaws begin dishing out soup for each other and discuss putting a ban on eating turtles. Dressed in uncommon clothing, some members of the group are briefly introduced, including the Nelson brothers, “Jailtime” (Lucas Nelson) and “The Particle Kid” (Mica Nelson), and The Man in the Black Hat who sits against a radiator with his guitar and glares at people.

The group of outlaws live in the mountains and fields in a “whimsical tale of music and love”. They live in the “future past”, where men and women are separated until the full moon appears. Men are in charge of scavenging for treasure, old technology, and other tradable objects, whereas women find food. When the full moon comes, the men trade what they have found with the women for food. One of many comic “poignant” moments of the film is when two of the outlaws sit in a two-man restroom staring out into the fields whilst sharing their view on love: “Love is like a fart, if you’ve gotta force it, it’s probably shit.” Although Young does not have many speaking lines, he plays and sings for much of the film. The band of outlaws eat and play games whilst chatting about Nietzsche, love, life, and of course, music.

Despite its effort to come across poetic, the film is very childish and clumsy. The characters dress in exaggerated clothing, and the filming is done using 16mm as well as a smartphone. This mix is very confusing to the viewer—is it supposed to look dream-like or realistic?

Hannah describes this film as “an accident”, “fun”, “more pot than plot”, and not really a serious movie. This is all true—the movie cannot be taken seriously. Adam Vollick’s filming and Paul Snyder’s editing make for a very trippy film, where even rain falls upwards at times.

With over an hour of baffling and confusing information, it isn’t long before the viewer gives up using usual judgments to make any sense of the film. Eventually I found myself letting go of my idea of the norm and trying hard to simply go with the flow. Alongside Young’s foreboding screen presence, the music is the only truly enjoyable part of the film. Seeing as the musical performances take up a large chunk of the film, it passes off more as a concert film than a cinematic feature film. Middle Photo: “The Man in the Black Hat” (Neil Young) with some of the outlaws hunting through the forest.

Bottom Photo: The Man in the Black Hat strumming his guitar.

Does Paradox pass the Bechdel-Wallace test?

Yes but only in a small portion of the film.

For the majority of the time, only men are onscreen. When the women first come on, there is music in the background miming of soundless dialogue. In one scene, a little girl gifts a woman a rock of some sort and says she doesn’t want to step on the plants. There are a few other short instances later on, but overall, there are very few scenes with women in at all.