‘Mortal Engines’, a steampunk fantasy by the producers of LOTR 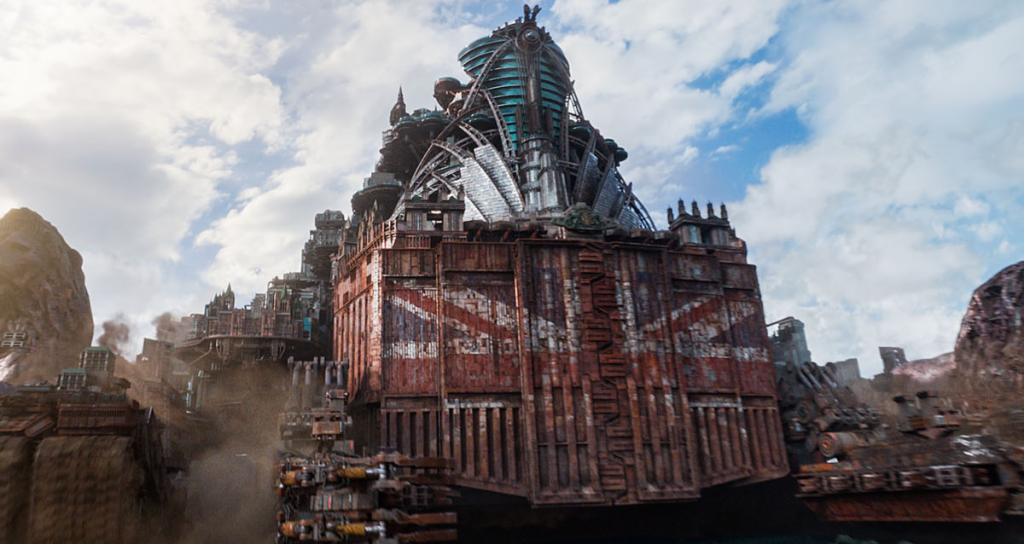 Mortal Engines, written by Fran Walsh, Philippa Boyens and Peter Jackson, is a steampunk fantasy in which the protagonists must team up to prevent the “Anti-Tractionist” land from being destroyed and imperialized. (BV 3.5/5.0)

Following a tragedy known as the “Sixty Minute War,”, humanity has been split into two leagues: the “Tractionists” and the “Anti-Tractionists.” Tractionist cities are built on mobile technologies and constantly on the move, whereas Anti-Tractionist cities are static and immobile, much like settlements today. One of the most prominent Tractionist cities is London. Here, one of the protagonists, Tom Natsworthy (Robert Sheehan) goes on an excursion with his friend Katherine (Leila George) to gather “Old-Tech” (items such as 2018 toasters and iPhones) for his job as a historian at London’s Museum. Here, Tom meets Thaddeus Valentine (Hugo Weaving), Katherine’s father, head of the Guild of Historians, and celebrated hero. While Tom and Valentine speak, Valentine is stabbed by Hester Shaw (Hera Hilmar), a girl who’s been after him for quite some time. Tom chases after her, and before she escapes she tells him that Valentine killed her mother and scarred her face. When Tom faces Valentine again, Valentine pushes him off the platform,is revealing himself to be a cruel man who is part of a conspiracy to expand Tractionist territory along with his own self-interest.

Tom, unharmed by his fall, finds himself in a hidden realm of the Tractionist city and Hester traverse the Great Hunting Grounds in attempt to find shelter, but are captured by other tractionists to be sold off. While in captivity, Hester confides in Tom, confirming again that Valentine killed her mother for refusing to give him piece of valuable Old-Tech that she found. Meanwhile, Valentine frees Shrike (Stephen Lang), a cyborg from a secluded prison, and pays him to chase Hester down and kill her. Tom and Hester are soon sold off in an auction, but thankfully saved by a freedom fighter named Anna Fang (Jihae). Not long after, Shrike finds the hideaways and attempts to take Hester with him, but the duo narrowly escapes. Later, on Anna’s ship, Hester learns that Anna is friend of her mother’s, and part of the Anti-Tractionist League that is trying to stop Valentine from unleashing destruction and havoc on their world.

While Tom and Hester scheme with the Anti-Tractionists, Valentine’s daughter Katherine grows suspicious of her father’s 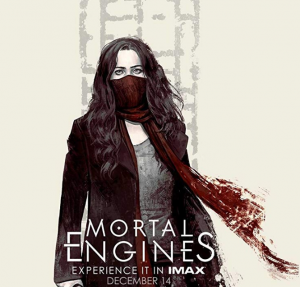 acts and Tom’s disappearance. She investigates, and discovers that her father’s “energy project” is much more than it seems, and her father is not the man she thought he once was. Meanwhile, Tom, Hester, Anna and the rest of the Anti-Tractionists conspire to prevent another war, but with Shrike on their trail they must be on full guard at all times.

With stunning visuals, thrilling suspense and action-packed explosions, Mortal Engines takes the viewer on an adventure across skies and land.

The setting is certainly quite interesting: post-apocalyptic, fantastical, and riddled with contraptions, there’s a lot of potential for a multi-verse series here. The various landscapes, complete with walking cities, fruitful skies, and dark, dangerous swamplands build a wonderful world to explore, especially with the impressive special effects. The film is also politically relevant, as many fantasies are: the civilian masses are manipulated by their leaders to think that their imperialism is a good thing. To see evil being uprooted is always a hopeful message.

However, I felt that the characters in Mortal Engines were severely one-dimensional. The mechanic side character Bevis (Ronan Rafery) was barely there, and existed only to serve Katherine for a few short moments. Hester is the poster girl of the movie, portrayed as a hardened girl with a tragic past. She gives a passionate performance, and has her, show-stealing moments, but also ultimately came across as a damsel in distress for reasons I won’t go into as to not spoil the plot. Tom, Katherine, Valentine…most of the characters were unmemorable.

Anna Fang was my favorite character as she was a driving force of action who got things done, but I was also unhappy with how she was executed (spoiler: quite literally, in fact). The trope of the “exotic badass” Asian might seem like a compliment when compared to other stereotypes, but when it’s one of the only pieces of Asian representation in Hollywood it gets a bit exhausting. It’s also a bit futile when (spoiler!) she’s killed off anyways. The film is definitely more inclusive than the Lord Of The Rings trilogy, but it was troublesome to see diverse characters introduced only for (spoiler: most of them to die anyways). Another gripe on this subject: the Tractionist land and leader felt like a conflated and uninformed version of Tibet and India. Perhaps the novel does a better job of explaining and illustrating the particulars of the fictional nation, but when it comes to representation, this depiction felt like a slap in the face.

One thing the film does an incredible job of is portraying the power imbalance of father-daughter relationships, specifically between Hester and Shrike, between Kate and Valentine, and between Hester and her real father. The flashbacks into Shrike’s memories reveal his love for and caring treatment of Hester, despite his position as a Stalker (someone who would supposedly have no feeling), and these moments are emotionally compelling and incredibly powerful. However, though the moment was tear-jerking–and my favorite scene in the entire film–it also irked me because of the scenes that followed. Why is romantic love more important than familial love? The relationship between Hester and Tom felt out of character for Hester. His kindness, shown over a very short period of time, was supposedly enough to “save” her after all of her hardship. It’s a bit hard to believe, and I believe their bond is more effective when interpreted as platonic rather than romantic.

Mortal Engines is a film to scratch an itch for wanderlust and fantasy, but other than its rich setting and special effects, a lot of areas felt lacking. It’s certainly not as revolutionary as The Lord of the Rings, but nonetheless a good film to pass time.

Yes. But they do talk about men a lot– one is the supervillain, so that’s kind of the point. 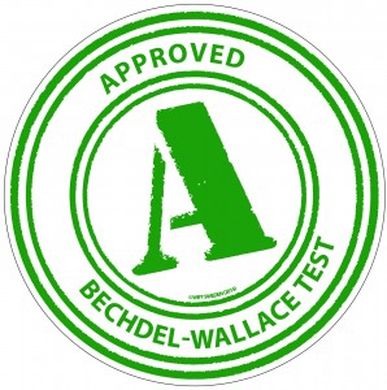