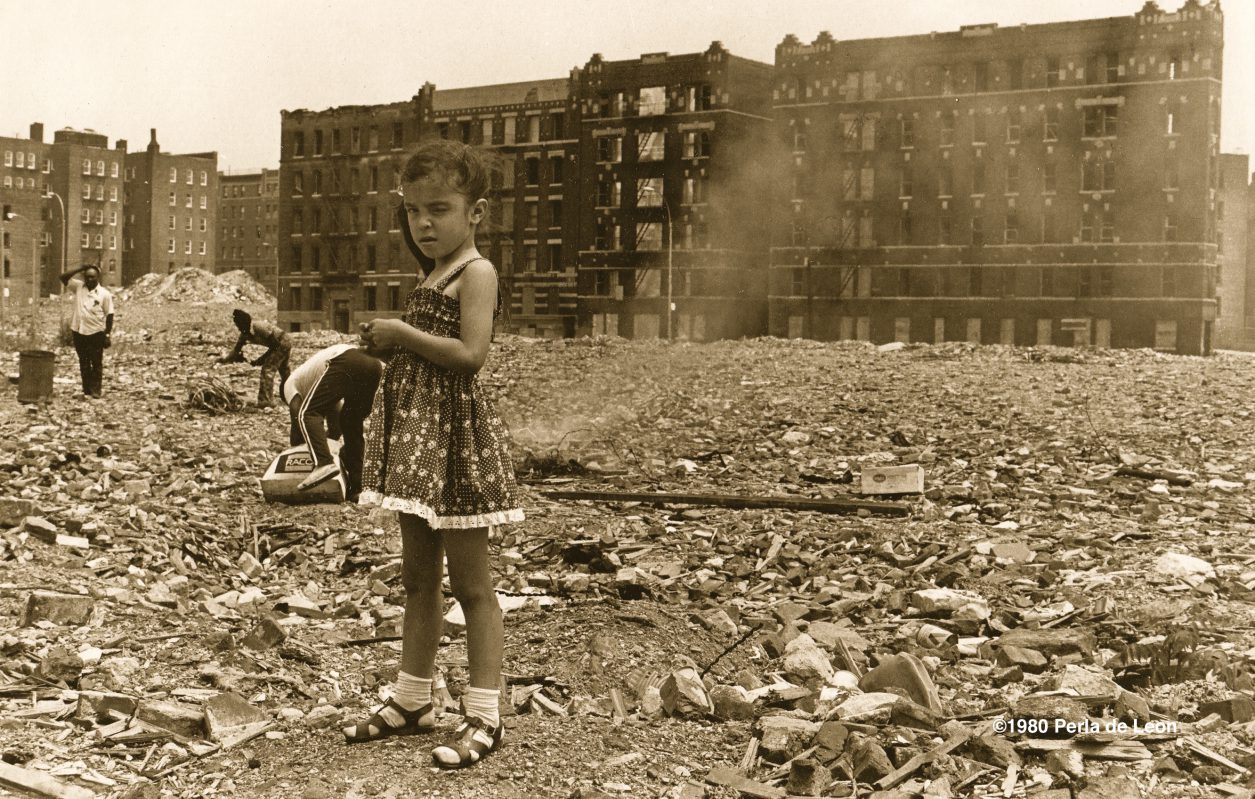 During the 70’s and early 80’s, the Bronx was burning. The documentary, Decade of Fire, explores the history of this chaotic time, delving deeper and uncovering the many factors that have put the Bronx at risk. (KAC: 4/5)

Vivian Vázquez Irizarry is a Bronx native. As a child, she witnessed the devastation and destruction that the fires of the 1970’s brought. She worked hard throughout school and went to college in upstate New York, but having seen her neighborhood quickly change, she moved back to the Bronx after graduating and pledged to help her neighborhood. This film follows her exploring a tragic, deeply corrupt time in New York City history and the journey her life has taken, from childhood to where she is today.

Vasquez’s personal story is touching. We get to know her as a child, but also see her today, sharing her history with her son and working with students in a Bronx high school. Her connection to the neighborhood makes everything feel more personal and less of a statistic. The documentary covers a large amount of history and many interconnected ideas that are sometimes hard to explain. However, everything works together; her own history blends with the history of the Bronx, giving us a microscopic look at the time period next to the macroscopic trends of presidents and public policy.

This film is a more powerful documentary than most. Gretchen Hildebran and Vivian Vázquez Irizarry’s direction is so precise. They put so much history and personality into 76 minutes. If anything, it left me wanting more. It fights to tell the real and complicated history of the fires: why they really started and why they were able to last for so long. It begins long before the first fire and ends long after, because the filmmakers want us to see that history is more than just the event, itself. Rather, its the interconnection of many decisions that leads to today. Policies on redlining, community organization, presidential visits, and blatant racism all lead to where the Bronx is today.

Unlike other political documentaries, the graphics and explanation of policy are impeccable. Maps show the audience how redlining works, then it’s quickly related to other policies that only affect these ‘redlined’ areas. Specifically, these filmmakers are making a point of explaining these policies succinctly and easily because they understand — and they want us to understand — that these policies are still causing disaster today. The film is so well researched and is very precise in its understanding of how much to explain and why. Vázquez Irizarry and Hildebran know exactly what they want the audience to walk away thinking about and they achieve that expertly.

I think these sort of documentaries can sometimes feel too anecdotal, but Decade of Fire avoids this through its diverse group of interviewees. We hear from activists, organizers, self-stated arsonists, firefighters, etc.. But, they’re all placed side by side, where no one person is more important than another. Vázquez Irizarry understands that every person she speaks to shows us another side of the history of the fires because their personal stories are the Bronx, whether or not they always did the best thing.

If you want to see a film that shows you the comprehensive history of the Bronx fires next to stories from the community that was there, watch this film. It’s personal, yet educational and it touches on the need for people to be agents of change. We see how the community within the Bronx fixed their neighborhood after the destruction of the fires. Hidlebran and Vázquez Irizarry urge us to look beyond our first impressions and work to uncover the systemic issues that affect mostly minority communities. Decade of Fire is documentary that wants us to learn from history and gives us every reason to do it.

Top Photo: Archival photo of a young girl in the Bronx standing in front of destroyed buildings.

Middle Photo: Poster for screenings of the film in NYC.

Bottom Photo: Archival photo of a partially destroyed church in the Bronx.

Q: Does Decade of Fire pass the Bechdel-Wallace Test?

Vivian Vázquez Irizarry, the main narrator, speaks to many people related to the fires, including a few women.

THE BOY NEXT DOOR

BODY & SOUL: THE STATE OF THE JEWISH NATION