‘The Game Changers’ Might Just Persuade You to Go Vegan 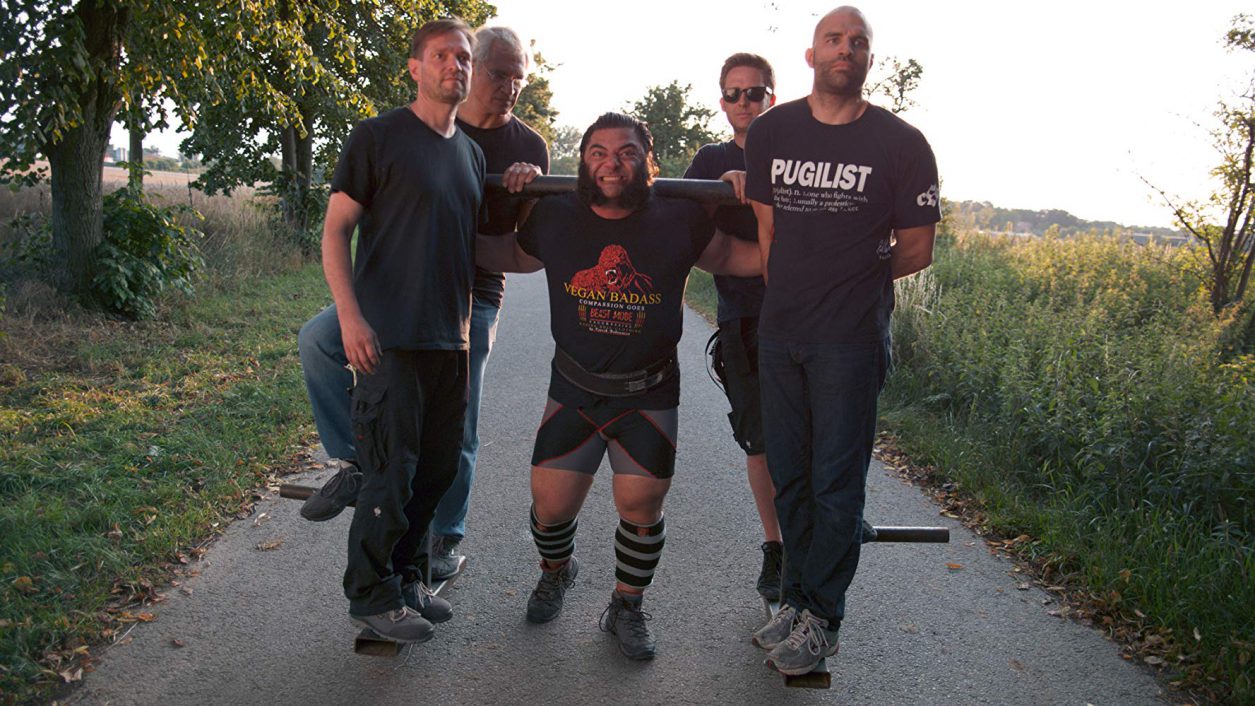 Any vegans in the audience are going to love co-writer Shannon Kornelson’s documentary on the benefits of a plant-based diet. Kornelson, director Louie Psihoyos, and a cast of interviewees from the Miami Dolphins to Arnold Schwarznegger show us that veganism doesn’t just benefit the average person, but even the highest level athletes as well. (GPG: 5/5)

As a vegan, I felt pretty damn good about myself walking out of The Game Changers. However, this film isn’t about guilting or shaming people who don’t currently eat vegan—The Game Changers is here to show everyone how to unlock more of their physical potential. Professional fighter James Wilks serves as the narrator as he walks us through his own personal quest to heal from an injury more efficiently, and goes from avowed meat eater to a vegan by the end of the movie. He’s an example of how just about anybody can have a better relationship to their body through greater knowledge of the dangers of meat and the benefits of plant-based alternatives.

Wilks starts with athletes who are already vegan, and finds a startling amount of runners, football players, and even weight lifters who have made the switch from meat to plants. The amount of giant football players we meet in the course of these interviews proves the bodybuilding and a vegan diet are compatible. Wilks experiments himself, eating the same things as his interviewees and partaking in the results of each test along with his subjects.

In between the real-life testaments to a vegan diet, Wilks explains to us through simple biology and statistics how and why this is the better option. We hear from an evolutionary biologist about how human teeth, supposedly developed specifically for meat, are actually much better suited to a primarily plant-based diet. We see vegans and carnists (as they’re called by vegans) compared at the biological level, and see the cholesterol from meat literally clouding the blood of meat eaters. In both its science and its athletic guest stars, this film was extraordinarily thorough, though I was wary of taking my science from a movie rather than a more objective, academic source.

The film references scientific papers, but makes note of the fact that it’s common practice for think tanks and corporations to hire scientists to conduct experiments in line with their desired outcomes. As we and Wilks learn, food crazes have come and gone in our society over and over again over the past century due to food industry marketing tactics, begging the question what makes this eighty-minute long infomercial for the soy industry different. Veganism has certainly been the best choice for me, and the evidence presented in this movie seems very sensible and in line with what I already know, but the price of avocados and tempeh these days makes it just as clear to me that corporations make plenty of money from my diet, too.

As far as my own personal choices go, I have the only piece of evidence I really need: I’ve tried being vegan, and I’ve tried eating meat, and my body works much better on a vegan diet. Over the past five years, I’ve gone back to meat every now and then—and no, I haven’t been vegan long enough for my body to stop making the enzymes to process meat—with the same results every time. Plant fuel burns cleaner for my body than meat fuel, and what I know of the science both lines up with that and makes intuitive sense. That said, here is a fact-check of the film’s main claims about a vegan diet—if you don’t want spoilers, then I guess come back to this review after you’ve seen the movie!

When it comes to building muscle mass, the vegan athletes (including the world’s current recordholder for most weight carried by a human) prove that it’s possible. However, the protein found in tofu is about one fourth the amount found in chicken, meaning that it may well be harder or less convenient for athletes to build huge muscles on a vegan diet. I would note, though, that the average person probably isn’t trying to get as swole as Arnold Schwarzenegger. Most people will probably be able to build all the muscle they want with a plant-based diet!

Regarding heart health, it’s true that soy and plants are much better for the cardiovascular system than meat. The American Heart Association recommends lots of vegetables and whole grains, with only skinless poultry and fish being on their list of recommended foods. I would just like to add that beef and chicken are often prepared much less healthily than vegan food. Hamburgers are obviously less healthy than a tofu stir fry, but not only because of the meat! Likewise, KFC would give you a heart attack even if they replaced the chicken with soy. For another thing, vegans tend to eat a lot more vegetables with their protein, meaning that dudes who eat steak every day aren’t just eating one less healthy food but also forgoing foods that are good for them at the same time. I even know a few vegans who eat mostly chips and Oreos (vegan, believe it or not!) and who have higher cholesterol than average.

Finally, there’s the claim of whether or not humans were, quote unquote, meant to eat meat. This is an answer that I could take in a few different directions, some of which would lead to inch-thick philosophical treatises, but in the end the best scientific knowledge can tell us a few things in support of this argument. While “meant” is a very charged concept, we know that human ancestors evolved as hunter-gatherers, with their typical diet consisting of primarily of plants and only secondarily of animals. Hunting animals is hard enough with guns, let alone handmade tools, so early humans probably had meat once a week at most, if that. This means that the evolutionary adaptations in our bodies that have been developing for the past few hundred thousand years are primarily geared toward making it easier for us to eat plants. However, as anyone who has ever eaten meat before can tell you, it is not impossible for humans to eat meat.

I bring these things up not because I want to disparage veganism, but because I think highly enough of my diet that I feel no need for exaggeration. I also bring it up for another reason, which is thoroughly covered in The Game Changers. Climate change, unlike the possibilities of bodybuilding on a vegan diet, is an indisuptable fact, and industrialized meat production is a major cause of it. If humans want to avoid levels of warming that would leave our planet uninhabitable, we’re going to need to do something about the staggering amount of water, electricity, and food that goes to raising animals for slaughter and processing their meat for consumption.

On that dark note, I leave people to make what they will of The Game Changers. I enjoyed it, just as I enjoy being vegan. If nothing else, I hope this film will convince you to try Meatless Mondays, a week of eating vegan, or whatever else works for you, so you can see for yourself!

Q: Does The Game Changers pass the Bechdel-Wallace test?

It doesn’t, though as a documentary this film isn’t operating under the circumstances the Bechdel-Wallace test was made for.

by Giorgi Plys-Garzotto September 17, 2019
Giorgi Plys-Garzotto is a journalist and copywriter living in Brooklyn. She especially loves writing about queer issues, period pieces, and the technical aspects of films. Some of her favorite FF2 pieces she's written are her review of The Game Changers, her feature on Black Christmas, and her interview with the founders of the Athena Film Festival! You can also find more of her work on her website!
Previous Post Next Post