In ‘Greener Grass,’ it isn’t always Better on the Other Side 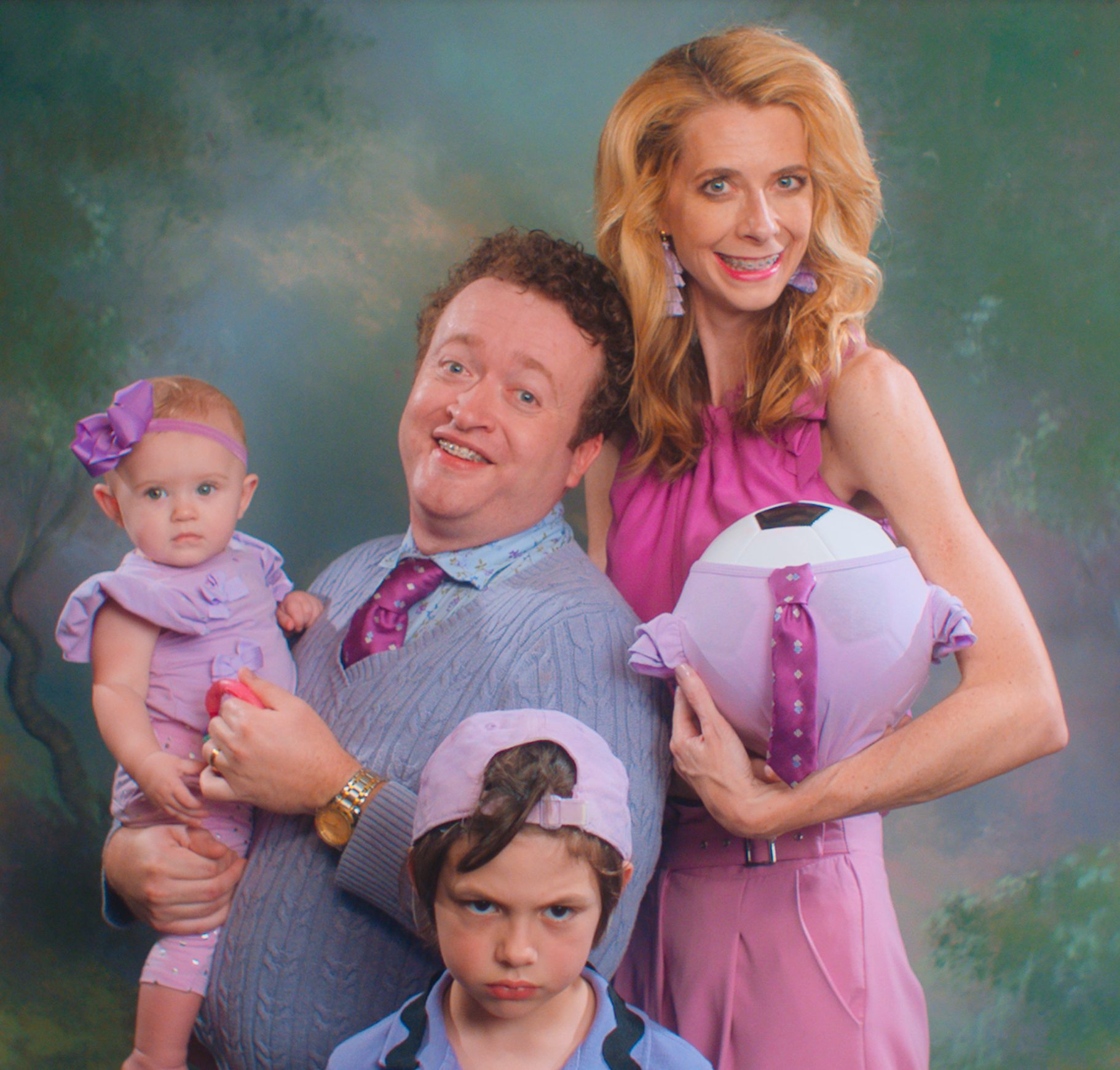 Created by and starring Jocelyn DeBoer and Dawn Luebbe, Greener Grass might be described mostly simply as an absurdist satire of upper middle class suburban parenthood, but it really defies categorization, displaying by turns sitcom playfulness, body horror, and kitschy nostalgia. The film is set in a neighborhood so colorful it’s almost dystopian, and it centers around two pastel-clad suburban moms, Jill (De Boer) and Lisa (Luebbe). (JRL: 4/5)

In the opening scene, Jill and Lisa sit on the bleachers of a youth soccer game, cheering for their sons with forced enthusiasm. Lisa suddenly notices Jill’s new baby and casually remarks on her cuteness. In an act of exaggerated politeness, Jill offers to give Lisa the newborn. Lisa accepts, and the bizarre transaction is complete amidst children’s screams and soccer moms’ cheers.

This is only the beginning of the satiristic culture at the center of the film: surface-level politeness barely concealing extreme competition. When four families in golf carts reach a four-way stop at the same time (everyone drives golf carts around here), they wave each other on relentlessly, all refusing to make the first move and break the facade of selflessness. Everyone dons outfits of full pastel, one color pallette per family, and their houses match. This is “little boxes” taken to a colorful extreme. 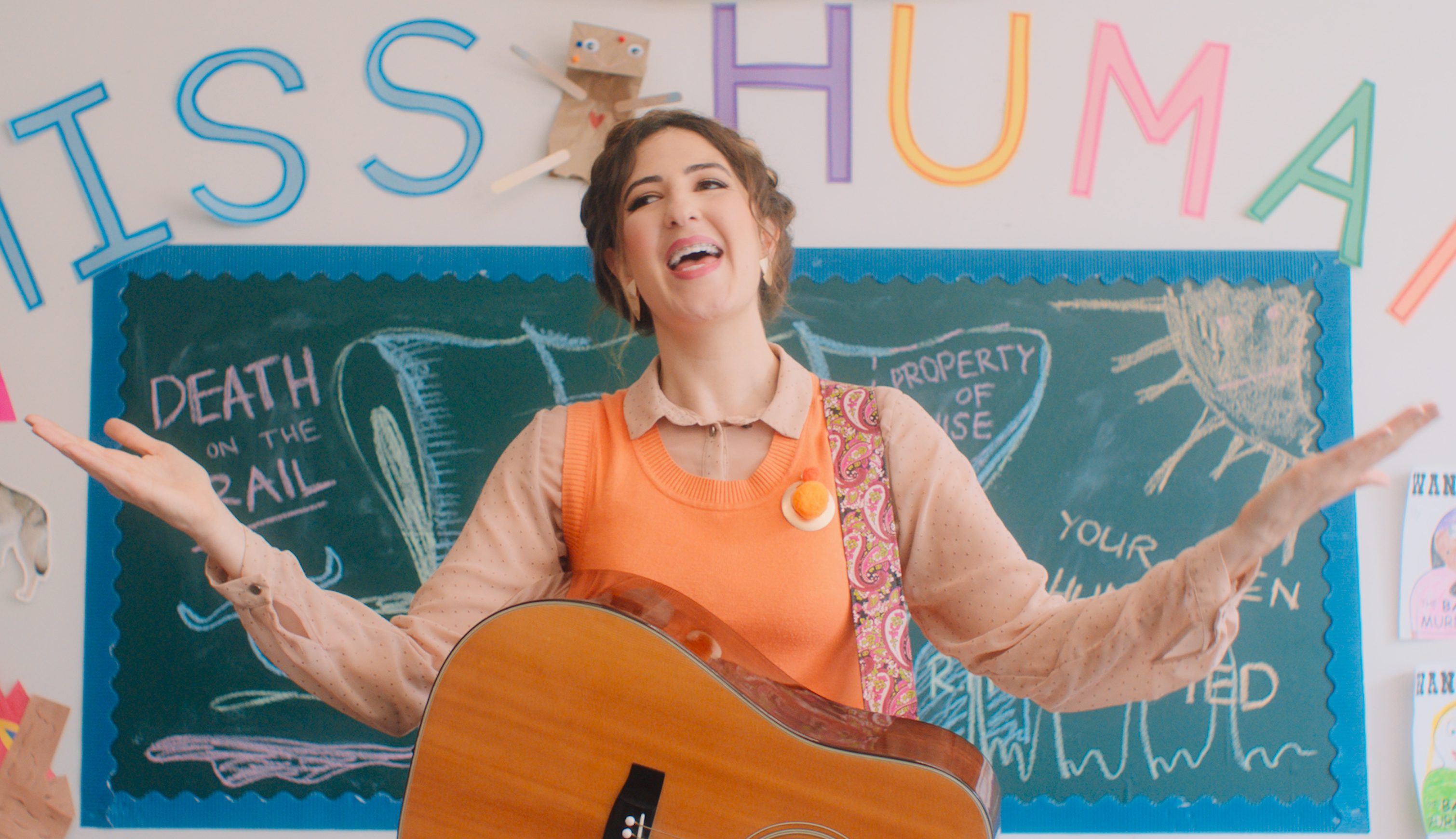 Amidst, and perhaps contributing to, all this aesthetic perfection, there is a distinct lack of real human connection; at one point, Jill and Lisa emerge from an excruciatingly long makeout session with their husbands to realize they had accidentally switched men, and were actually making out with each other’s. Looming over the whole story is the mystery of a “grocery bagger murderer” who has killed the community yoga instructor, but nobody is really affected by it. At least at first, it’s just another topic for polite chat.

Jill struggles with the loss of her baby, regretful of her careless decision to give her away. After Jill’s older son, her only child left, falls into their pool and inexplicably turns into a golden retriever, she struggles to find the purpose and sense of belonging she once had. Her painfully exaggerated need for politeness and non-confrontational submission are no longer useful tools in this new challenge of rebuilding her life. Meanwhile Lisa gradually takes everything Jill has, insidiously and politely.

The comedy of Greener Grass is a very particular strain of humor, but whatever it is, the film is completely packed with it. There are small, clever jabs at suburban culture around every corner. There are also elements of complete absurdity, so exaggerated you can’t help but laugh, my favorite example being that every adult in the film has a mouthful of braces. The wacky side characters are brilliantly crafted and acted, like The Good Place’s D’Arcy Carden as “Miss Human,” the elementary school teacher with a sadistic affinity for teaching her class about murderers. There is nothing naturalistic about this film and the humor is anything but conventional. However, if you have a taste for comedy that’s ridiculous, strange, and sometimes actually horrific, Greener Grass might be the film for you.

It’s this very absurdity that makes the film fresh and unique. With all of the bizarre plot twists and uncanny occurrences, it’s  original and thoroughly unpredictable. By my interpretation, all of this works to a clear greater purpose: to show, through exaggeration, the absurdity of suburban life, which is full of empty politeness and void of real human connection. This film is for people who can handle a level of bizarre that is sometimes literally jaw-dropping, and who have an affinity for absurd humor. If you are one of those people (and really only then), then you will love this film.