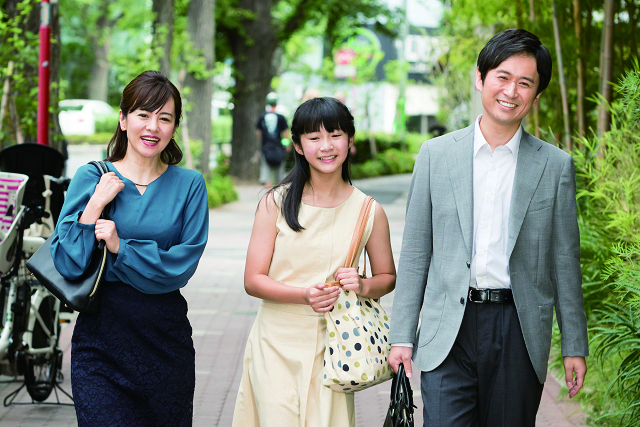 Immortal Hero, screenplay by Sayaka Okawa, is a film about a man determined to spread his gospel of love. Makoto Mioya is a successful author who owns a publishing company, and seemingly has a perfect life — but soon, faces a life-threatening, near death experience that causes him to reevaluate his priorities.  (BV: 2.0/5.0)

In Immortal Hero, Makoto Mioya (Hisaaki Takeuchi) lives a comfortable life as a famed author and CEO of a publishing company. He and family are the picture of a traditional Japanese family, him being the breadwinner and his wife (Tamao Sato) the caretaker. Their life seems perfect to outsiders, but the family is estranged under airs.

Makoto also holds a deep secret — he is able to communicate with spirits of different religions, and this power makes him wonder if he is destined for something more. Will a near death experience cause Makoto to reevaluate his life, and perhaps even change the world with his ability and his word?

I don’t know what I expected from Immortal Hero. The title gave an impression of action, and I’m a huge fan of Japanese cinema, so I went into the theater anticipating something I could hopefully enjoy.  But going in blind was a mistake; I should have prepared myself for what was to come. Film is such a difficult medium and conveying ideas takes hard work, so I desperately try not to be too critical of films I dislike — I know the amount of labor and toil art takes myself. But I truly could not find much to enjoy about Immortal Hero. I’ll try to list some positives: the cinematography is beautiful, panning aerial shots of Tokyo, and soundtrack decent enough — but as soon as I discovered that the film was essentially religious propaganda, I desperately wanted it to be over.

It’s incredibly ignorant to boil down solving the world’s issues with “kindness”, especially considering the global state of revolution right now. Each country obviously has its own set of issues — corrupt governments, natural disasters worsening due to climate change, and “borders” are only a few of a plethora. But such conflicts are packed with hundreds of years of complicated history, whether it be due to imperialism, exploitation, corrupt governments or other matters. These problems can’t be solved with love and simplifying such nuanced struggles is insulting.

Curing illness with sheer willpower is also almost impossible. It was deeply offensive on a personal level to hear that simply having enough faith could cure a terminal illness. Mioya’s wife Isoko is consistently painted as the villain in Immortal Hero, insisting that he’s irrational for not believing in doctors. Sure, there are some things that modern (and western) medicine can’t solve, and science is an ever-changing discipline. But she speaks out of concern and common sense, not to mention that she’s also a doctor herself. It’s not that faith can’t help in trying times. A strong will can certainly help one live longer, but implying that faith alone can cure a disease or pre-existing condition is irresponsible and can easily be twisted into anti-science propaganda.

Even with all of these moral factors, Immortal Hero isn’t capturing as a film either. The acting is cheesy and special effects are so ridiculous that it’s borderline hilarious. The film could have been a touching tale about a father becoming a family man, but failed in that regard as well. For someone advocating love, Mioya still ended up somewhat neglecting his kids. He reasons that it’s for “the good of the rest of the world”, but shouldn’t love stem from your loved ones to begin with?

It seems that Immortal Hero was essentially made to promote real life counterpart Ryuho Okawa’s teachings, so it served its purpose for marketing in that regard. I assume that the screenplay is by his daughter as they share a family name. But I don’t think it’d appeal to anyone, unless you’re that ignorant in your beliefs. Apparently, Okawa’s ‘happy science’ is widely regarded as a cult, so I leave that to your judgment.

If it does, it’s very loosely.