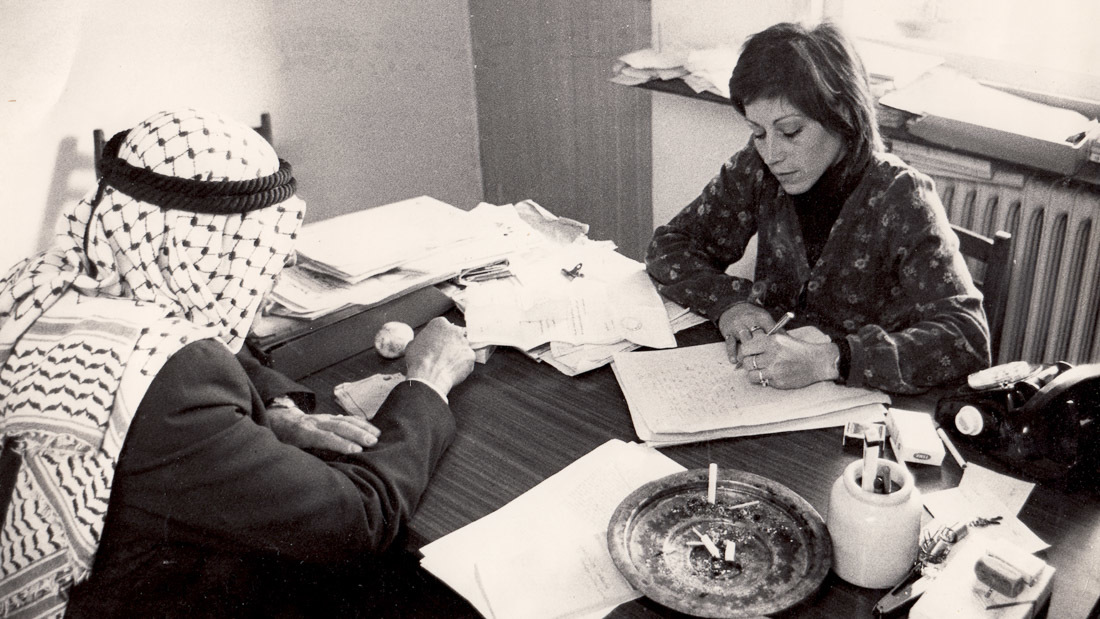 The Advocate is a documentary by Rachel Leah Jones that follows Isreali human rights lawyer Lea Tsemel’s life and career defending Palestinian clients. Focusing on the cases of 13 year old Ahmad and domestic violence victim Israa Jabis, The Advocate is a difficult and heart-wrenching watch reminding that there is always two sides to a conflict (BV 4.5/5.0).

Lea Tsemel is a lawyer who defends “terrorists” and is often called a “devil’s advocate”. However, it’s not that she defends such violence like the killings of civilians, but attempts to humanize a repressed people under occupation and ultimately reduce their punishments. The Advocate details Tsemel’s past and her extensive career, from her student activism days, raising a family with anti-Zionist Michael Warschawski despite threats to their security, her work with the Isreali Justice System to criminalize inhumane methods of torture — and now, her work with Palestinian clients, specifically a woman and a child.

Ahmad, a 13 year old boy, living in a neighborhood with tense Isreali-Palestinian relations, who waved a ceremonial knife around to scare and act adult with a cousin. Israa, a woman with a history of suicide attempts to escape abuse. To the press and general public, they are an uncontrollable delinquent and a suicide bomber, but with Tsemel, we see their truths. Switching between Arabic and Hebrew, Tsemel is indiscriminate with her clients and treats them with care even if their cases may seem futile, as she feels it is her duty as an Isreali, and as she puts so eloquently — “Isrealis have no right to tell Palestinians how to struggle.”

In The Advocate, victims are protected by a rotoscope with animated imagery composed of newspaper headlines that veils their forms. I liked how “protected” they felt in the documentary, as media is often relentless and unforgiving with flashing decapitated and suffering brown bodies. The imagery is harrowing, and in some cases should be shown. Citizen reporting has become essential in the age of social media, and platforms like Twitter are utilized to spread awareness of injustices happening around the world.

However, documentaries are the product of months and even years of filming, and take a lot of editing and work. Filmmakers can easily opt out of showing gruesome footage but many choose to include it. It is shown mostly for awareness, but when an image or video is is excessively violent, it feels like shock value. It’s even more jarring when people not of the same race film another’s violence; even if done in good intent, the suffering becomes borderline voyeuristic, and questions how ethical the documentary may be.

In today’s political climate with copious reporting on Central and Western Asian relations, we should be more aware of these boundaries than ever. Media does not care about brown bodies; even in factors as simple as tweets, the brown body is played down in favor of the Western one. An American, Canadian, European citizen has died — but what about the Iranian, Iraqi, Palestinian? Why is one body worth more than the other? That’s why I truly admired the way The Advocate treated its victims; they had a form of protection when shown to a western audience (though I’m sure they did not originally, when the cases happened) and they were not desensitized.

I do wish that the second case had been more comprehensive; I imagine there was enough material to suit Israa Jabis’s own documentary and compared to Ahmad’s case, the segment felt rushed. Nonetheless, I understand that The Advocate was mostly a portrait of Lea Tsemel and her work as a lawyer. However, being such a multi-faceted person, I feel that the glimpse into Tsemel’s life was still small and that the sections with her children and husband could have been longer. Still, what was shown of Tsemel’s personality and past served a good contrast to the rest of the film — spunk and a dry sense of humor, as well as sheer perseverance despite the reality of most of her cases being almost futile. Unlike one of her colleagues, who no longer believed in Justice, Tsemel remains an “angry optimistic woman”, who still works to defend her victims and desperately tries to change from within. The Advocate is still a heavy watch, thus Tsemel’s witty remarks and crude jokes were refreshing against a generally somber mood.

As someone who admittedly only knows the sheer basics of the Isreali-Palestinian conflict, The Advocate was an insightful view into the injustices and prejudices that Palestinians go through. Police brutality is unfortunately global, and although there’s cultural nuance that differs vastly from America’s own problem, I was reminded of the prison industrial complex and mass incarceration that our country faces itself. As mentioned previously, brown bodies are desensitized, and black bodies are obviously no stranger to this phenomenon either.

The Advocate reminds that there are always two sides to a conflict. Acts of terrorism seem indisputibly unjust, but what of a people displaced, mistreated, exploited? After knowing what they’ve gone through, can one think of them as fully evil? Tsemel’s documentary explores the history and reasoning behind the oppressed and acts of “terror”; though their acts are still wrong, Tsemel attempts to start the conversation — that these people still deserve to be treated humanely. The film’s material is hard to digest, but it’s probably one of the best documentaries I’ve watched, and I commend directors Rachel Leah Jones and Philippe Bellaïche for their thoughtful and respectful work.

Does The Advocate pass the Bechdel-Wallace test?

Technically, it does with the second case, but it’s not important in this context.