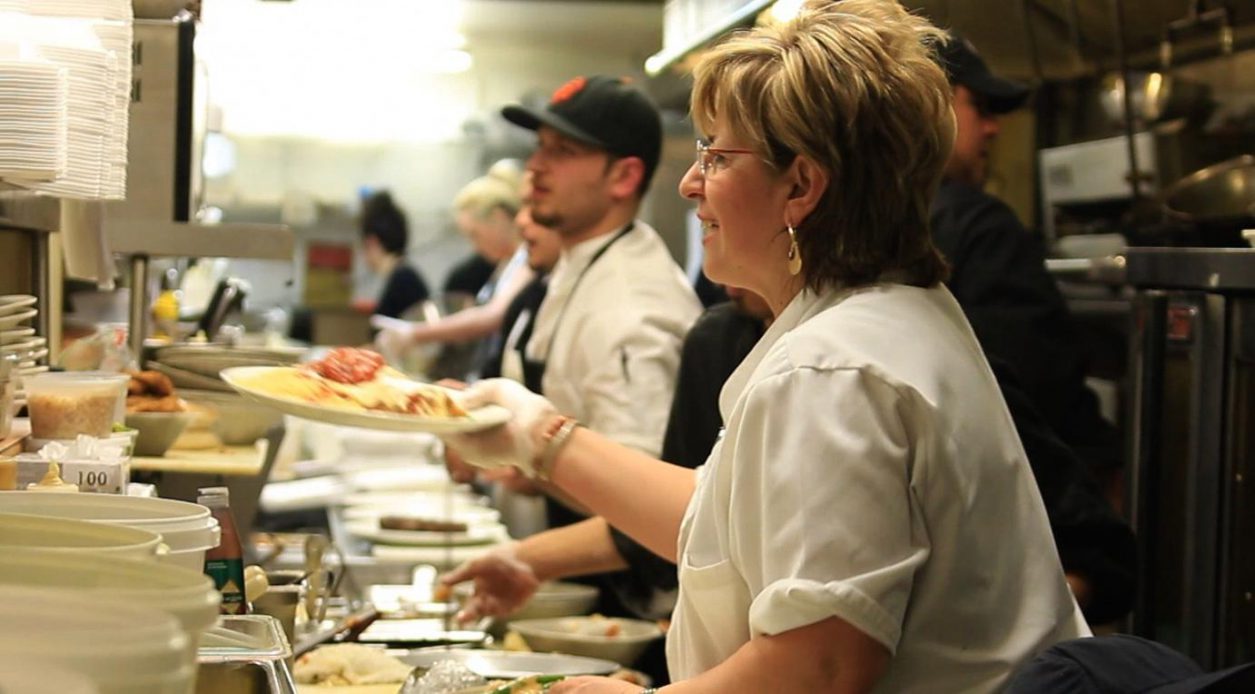 In her first documentary and film, director Joanna James explores the struggles of top female chefs and restaurant owners to gain recognition in an industry ruled by men. At the same time, she tells the story of her own mother, chef and restaurant owner Valerie James, and her life of hard work and perseverance. (RMM: 4/5)

Less than 7% of chefs and restaurant owners in the U.S. are women. This is a shockingly low number, considering the fact that around half of graduates from the female-founded Culinary Institute of America are actually women. Furthermore, men continue to dominate the food industry as they have for decades. In her debut documentary, Joanna James explores this fact and its effects, interviewing prominent and successful female chefs and restaurant owners, including her own mother. Each has something to say about the mistreatment they’ve faced as women, as well as the recognition that they’ve fought hard for and continue to fight for.

At the heart of the film stands Valerie James, a hardworking mother of two who has solely owned and operated Val’s Restaurant in Holden, Massachusetts since 1991. Having been raised in the restaurant industry, James was crushed when the family’s pizzerias and restaurants went to her uninvolved brother instead of herself. Up to the age of 16, James spent her summers in Greece with her extended family, learning the Greek language as well as Greek traditions. James married young, but by age 30 was already divorced and supporting her children alone. She was told that she’d never own her own restaurant, but James refused to give up on her dream. After years of loans and long workdays, Val’s Restaurant runs smoothly and successfully with James at the helm continuing to work in the industry that she loves.

The telling of James’ story is interspersed with interview clips from successful female chefs and restaurant owners from all around the U.S. and world. Each one speaks about the sexism they’ve come up against in the industry. Notable interviewees include chef, author, and television host Lidia Bastianich, who believes that had she not entered the industry with her husband, she would not have been taken seriously. First female Iron Chef champion Cat Cora remembers the times when restaurants denied her work because they “don’t take women”. World-famous cake maker Sylvia Weinstock says that because she was a woman, she had to work twice as hard at her craft so that the men would accept her into the community.

Joanna James’ debut documentary is both informative and inspirational. It simply and effectively points out the irony in the food industry: that cooking has always been viewed as a part of the woman’s role in the household, yet becomes fit for only a man when it becomes a profession. Just about every successful male chef began his career or was at least inspired by the women in his life, especially mothers. Yet these same men, as well as the industry they are a part of, have ignored these women. A 2013 issue of Time magazine featured an article titled “The Gods of Food” and failed to mention a single female chef.

Women are not treated as equals in most industries, and the world of food is not an exception. Though James did focus on this aspect of the culinary industry, she made sure to center her film around the women rather than the injustice of their absence from recognition. Women like Italian-American Bastianich bring their cultures into their cuisine, enriching it. James’ mother, Valerie, is happy to bring smiles to her customers’ faces with her food and hospitality.

While the documentary is mostly clear, I did find the section on the “Me Too” movement to be confusing. Maybe my confusion stems from my lack of knowledge about the food industry, but I think it’s fair to assume that this is a blind spot many audience members may have as well. Rather than briefly referencing the scandal around chef Mario Vitali with news report clips and a montage of article headlines, I would’ve appreciated a more coherent, thorough explanation of the situation and what it further signifies for women in food.

Otherwise, this is a solid documentary full of heart. Worth a watch.

Featured Photo: Valerie and employees work in the kitchen.

Q: Does A Fine Line pass the Bechdel-Wallace Test?

This film was created by women, for women, and about women. Every exchange between the interviewer and interviewees is a discussion about women in the food industry.

Behind “The Cove”-The Quiet Japanese Speak Out

by Roza Melkumyan February 28, 2020
As a member of the FF2 Media team, Roza writes features and reviews and coaches other associates and interns. She joined the team as an intern herself during her third year of study at New York University. There she individualized her major and studied narrative through a cultural lens and in the mediums of literature, theatre, and film. At school, Roza studied abroad in Florence and London, worked as a Resident Assistant, and workshopped a play she wrote and co-directed. Since graduating, she spent six months in Spain teaching English and practicing her Spanish. Most recently, she spent a year in Armenia teaching university English as a Fulbright scholar. Her love of film has only grown over the years, and she is dedicated to providing the space necessary for female filmmakers to prosper.
Previous Post Next Post