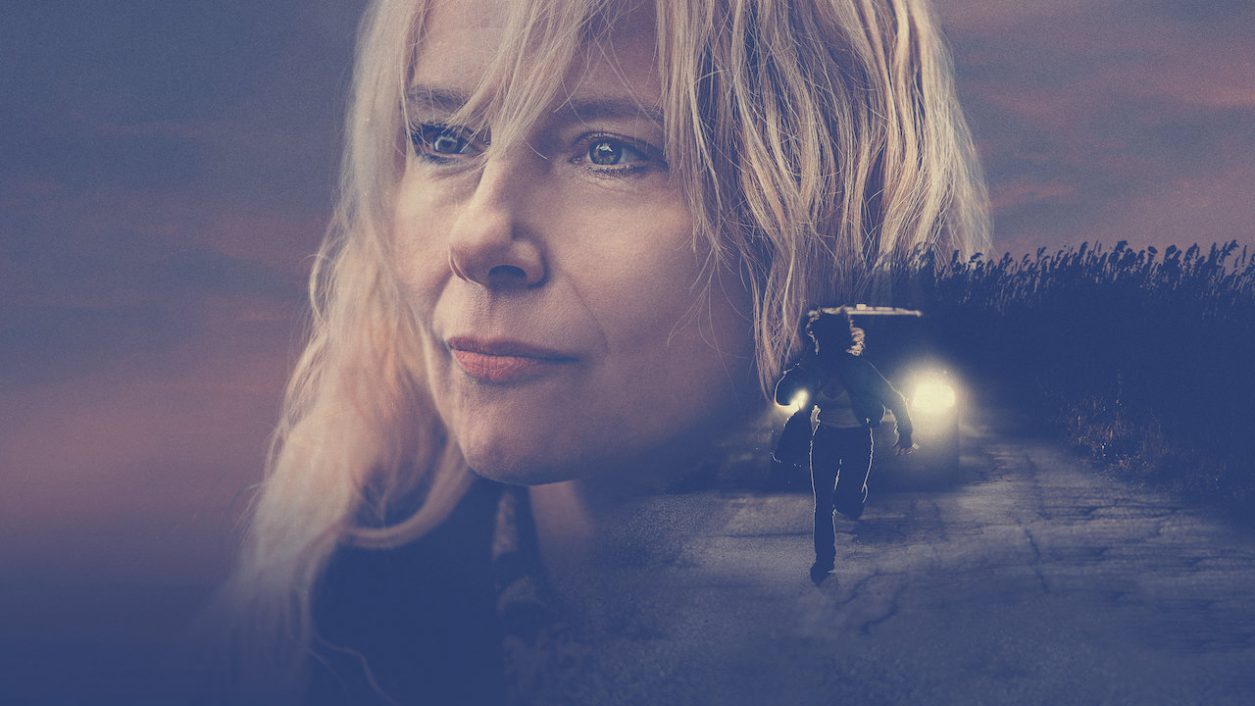 It’s dark on the streets in the middle of what looks like a countryside road with fields on either side. A woman’s voice sings a cappella over quiet, eerie music as a shaky camera follows a girl running away from a car. The car’s headlights shine brightly on the frightened girl who’s scrambling to call someone on her phone. Moments later, the streets are empty again.

Earlier that day, “Mari Gilbert” (Amy Ryan), walks off the construction site as she finishes her shift. She looks at the allocated shifts on the noticeboard–she’s only been put on the schedule for three days this week despite having asked for more. She takes off her yellow high visibility safety vest and grabs her jacket from her locker whilst complaining that even her colleague got five shifts. The year is 2010; Mari leans against a fence outside a diner at Ellenville, New York and she smokes a cigarette in between sips of coffee. Mid-sip, she receives a call from the school to pick up her daughter who’s been suspended from school due to an incident in the school’s bathroom. Mari brings her daughter, “Sarra Gilbert” (Oona Laurence), to her next job at a diner and places her at the counter with her homework. Sarra got in trouble for lighting paper towels on fire in the bathroom at school–it’s because she didn’t take her medicine again.

On the drive home she calls her older daughter, “Shannan Gilbert” (Sarah Wisser), to complain about her boss. Shannan offers her mother some money and Mari immediately accepts saying she will pay her back once things get back on track. It’s been a while since Shannan has been back home, and Mari’s face lights up when Shannan suggests she come visit the family tomorrow. At home, Shannan digs out some old tapes and finds a 1999 recording of Shannan singing at a school talent show. It’s the same song that was sung at the start of the movie. “Sherre Gilbert” (Thomasin Mckenzie), the second daughter, is skeptical that her older sister will come. Mari senses this and asks why can’t she be happy for once. Hours pass and the mother and her two daughters sit at the table waiting and waiting. Shannan still isn’t here. Disappointed and disheartened, Mari goes out for a drive. Sherre lies on her bed and rings Shannan and leaves a voice message letting her know that their mother seems quite upset and that the family misses her.

In the morning Sherri, who acts like the second adult in the family, checks in on her irritated mother, who brushes off last night’s incident as a schedule conflict. An unknown doctor calls asking for Shannan, but Mari lets them know that the girl hasn’t lived here since she was 12. But this odd call doesn’t go unnoticed; Sherri feels that something is off and explains that Shannan’s boyfriend called her last night–something he’s never done before.

Mari continues with her day at the construction site and then at the diner, but when she returns back home, she decides that something is definitely not right. It’s been 48 hours already and she still cannot reach Shannan, but the police are refusing to do anything about it. Apparently she’s not on their system, and the doctor’s caller ID comes up as an unknown number from Long Island. Mari takes her daughters with her to a police station at Jersey City, but is cut off by the police officer when describing the situation as he drops a pile of paperwork. Frustrated and worried, Mari leaves and starts to take things into her own hands. She finds out that her daughter has five cell phones, and even her abusive boyfriend has no idea where she is either. The only thing they learn of is that she had a job at Long Island and never came back from it. This is the beginning of a long and arduous process of a mother’s hunt for her daughter, as she realizes that Shannan is only one of many girls whose disappearance has been ignored by the police.

Director Liz Garbus pulls off an impressive film that was always meant to hold a solemn and grave tone. Based on real life events that are also documented in Robert Kolker’s book Lost Girls: An Unsolved American Mystery, Kolker and writer Werwie create a script that is tense throughout. Although a few important details are left out, Amy Ryan’s performance is so strong that the audience is drawn to the heartbreaking quest. Ryan’s acting is impeccable here, as we follow a guilt-ridden, yet righteously persevering mother. Thomasin Mckenzie also does a great job embodying a young girl who is forced to grow up early in the midst of a sad story. Oona Laurence also delivers an impressive performance as the youngest daughter. The music by Anne Nikitin creates the perfect atmosphere, and Lisa Myers’ production design completes the cool visual tone.

It’s important to point out that there are so many women characters in this film that add important elements to the story. These are women who have lost sisters, friends, and daughters. As these women come together to help each other, there is a sense of sisterhood and support, which reminds us of how important standing together can be. During a Q&A with the actors, they talked about how different it felt turning up to a film set and working on characters that relied on support from women. Some of the women whose families were impacted were in the audience at the Athena Film Festival in New York, and they voiced how they hope the film can continue to spread the story to the masses, so that people can see the problems that lie in the Law enforcement and media sectors. I am glad that Liz Garbus took on this project with Netflix, as it is one of many buried stories that needs to be recorded in the arts. Despite its dark tone, if you’re looking for a tense detective story that humanizes struggling families, this is the film to watch.

Bottom Photo: Mari putting up posters of her missing daughter.

Yes. There are a lot of conversations between “Mari Gilbert” (Amy Ryan) and her two daughters, “Sherre Gilbert” (Thomasin McKenzie) and “Sarra Gilbert” (Oona Laurence) about their missing sister. The other women who have lost daughters, sisters, and friends, also discuss the missing girls.