by Carlotta Plys-Garzotto
Uncategorized
No comments

It seems like the world could always learn a lesson in kindness and emotional growth, and in this time of social distancing, A Beautiful Day in the Neighborhood is more relevant than ever. Giorgi and Carly first saw this movie in theaters last year, and revisit it now over a Facetime hangout to discuss Marielle Heller’s direction. Below are their musings on the film and being human.

Giorgi: So, it’s a beautiful day in the neighborhood, is it not?

Giorgi: A Beautiful Day for a Neighbor. . . So what’s your main takeaway from the movie?

Carly: Well I think especially in this time of social distancing it’s even more important to remember just to try and be kind to other people.

Giorgi: I think my main takeaway was that you really have to unpack your feelings before your life can be functional. Otherwise, you’ll just be living in your old wounds forever.

Carly: Yeah, I can’t believe how far Lloyd got in his life being so emotionally stunted.

Carly: I can’t believe his wife married him in the state he was in.

Giorgi: Yeah, my roommate Loren was actually saying he didn’t feel a lot of sympathy for the wife because she invited his dad into their home without his consent.

Carly: I thought that was weird too.

Carly: Right. When they were having that talk in the park, it didn’t feel very connected. He was just so annoying — he’s like everyone, though.

Giorgi: Yeah, I hate men honestly. And it’s not just men either.

Carly: True, and this movie has hope that people can grow and change.

Giorgi: Exactly. I feel like he started out just convinced that he couldn’t change. But the movie shows that you can and you must. For the people around you and yourself.

Giorgi: Right, just like “hey, I’m already emotionally dead inside. So I can’t be hurt and I’m better than you”.

Carly: Yes! They think it’s cool to be mean.

Giorgi: Yep, they think it’s cool to be jaded and over it.

Carly: But Mr. Rogers is the coolest.

Giorgi: And he never does that.

Carly: Yes. One of my favorite moments in the movie is when Lloyd calls Mr. Rogers a saint and Mr. Roger’s wife says she doesn’t like to use that word because that makes his way of being, his kindness, seem unattainable.

Giorgi: Yes, and I love how the movie shows that Mr. Rogers is an attainable ideal, and he works on it all the time.

Carly: He’s a real person. I love that.

Giorgi: That’s the most hopeful thing. Not just that he’s telling us that we can do it, but he shows that we can.

Carly: And that it’s not always the easiest thing. It might be the hardest thing.

Giorgi: It’s the hardest thing in the entire world. Just being human.

Carly: Yes, to be emotional is the hardest thing. It takes a lot of strength.

Giorgi: Exactly. Self-awareness, humility, vulnerability. The hardest thing, especially in our society, where you’re told to have to be perfect, and you have to be constantly protecting yourself from hurt, and constantly trying to one-up other people and get ahead of them instead of being real.

Carly: And the only thing that matters is making money.

Giorgi: It’s all competition.  . . So Marielle Heller is the director.

Carly: I think it’s awesome they got a female director.

Giorgi: For a movie about guys mostly?

Carly: I was gonna say for a movie about emotions, but obviously in an ideal world men could also be emotional.

Giorgi: Right, and it’s about a man who can be emotional, learns to be emotional. Which is a pretty big exception. What do you think about the beginning– “Someone hurt my friend Lloyd”?

Carly: I love the form they use of it being an episode of Mr. Rogers’ show. It’s very effective.

Giorgi: It’s kind of got this absurdist nightmare element to it, too.

Carly: Yes, parts of it are almost ironic, which is interesting.

Giorgi: RIght. It knows that the viewer is probably going to be a little disbelieving of Mr. Rogers and going into it thinking that the movie is going to show him having a dark side or being a hypocrite or something. They kind of play into that, but don’t indulge it.

Carly: Yes! Also how the whole film is also supposed to be like Lloyd’s article–where it’s about Mr. Rogers, but also a lot about Lloyd and through Lloyd’s perspective. So they kind of that structure as well as the episode structure.

Giorgi: Yeah, that drives the story forward. I thought it was interesting how Lloyd has paralleled to Daniel the puppet. There’s this one scene where they show Lloyd in bed, but for a split second, it’s Daniel in his bed.

Carly: Oh my god, I didn’t even notice that. That’s so funny.

Giorgi: I noticed it last time, but it got lost in the shuffle, and this time I was thinking about it more. It’s interesting because you wouldn’t think of Daniel for someone with anger issues, you think of him as being timid. But Lloyd is really shy about his feelings.

Carly: That’s so true, and Lloyd just uses anger to hide his feelings, so deep down he’s Daniel. That’s so sad.

Giorgi: I just want to cuddle him. The scene where Mr. Rogers is doing the puppet at him. When he’s showing Lloyd the puppets.

Carly: And he won’t stop!

Giorgi: Without warning, he starts being Daniel. Trying to make Lloyd talk to him.

Carly: And Lloyd can’t handle it.

Giorgi: And Mr. Rogers just keeps going, “why don’t you want to talk to Daniel?” It was almost like a Mr. Rogers episode for adults.

Giorgi: RIght. A community of people, going about their lives, and they have their problems, and Mr. Rogers helps them work through that stuff.

Carly: That’s so true. It’s also never cheesy. There are those moments of irony, but somehow it’s never over the top or cheesy. Do you think it is?

Carly: You would think it would be.

Giorgi: But, no. The self-awareness kind of defuses that.

Carly: And the genuineness.

Giorgi: Right, it knows what it is.

Carly: And Tom Hanks is just such a sweetie.

Giorgi: He really just–was balls to the walls Mr. Rogers.

Carly: He was perfect, honestly. So what was your favorite part?

Giorgi: I think the aesthetic, the interludes, the dreams.

Giorgi: I also loved how Lloyd’s baby always cries at very intense moments. Like when the dad is yelling at Lloyd in his apartment, and at the wedding, too. There’s this moment when the baby is crying, and it’s like this audio incarnation of everybody’s inner child coming out. . .  And there’s another part where they use a siren in the same way.

Giorgi: That part where Mr. Rogers and his wife were playing two pianos was fun.

Carly: Yeah, that was weird.

Giorgi: It was so extra.

Carly: Why do they have two pianos?

Giorgi: I’m not sure if that was a biographical detail or something. But it was cute to see how they do life together like it’s a piano duet.

Giorgi: Yes. I feel like mom and dad would cry.

Carly: It’s good to cry together. 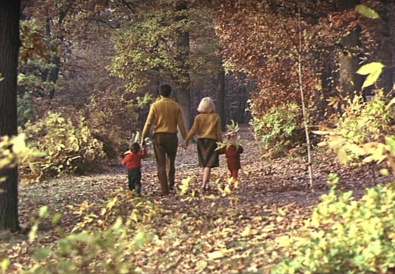 by Carlotta Plys-Garzotto April 29, 2020
Carlotta Plys-Garzotto was born in Chicago and attended acting and drama therapy school in New York City. She recently relocated to Los Angeles to try out the film industry. Carlotta has always been drawn to the arts whether it's visual, writing, theatre, or film. She has recently been taking improv classes at Upright Citizens Brigade. Carlotta is a Leo with an Aquarius moon. She loves making music videos, eating ice cream, and traveling.
Previous Post Next Post