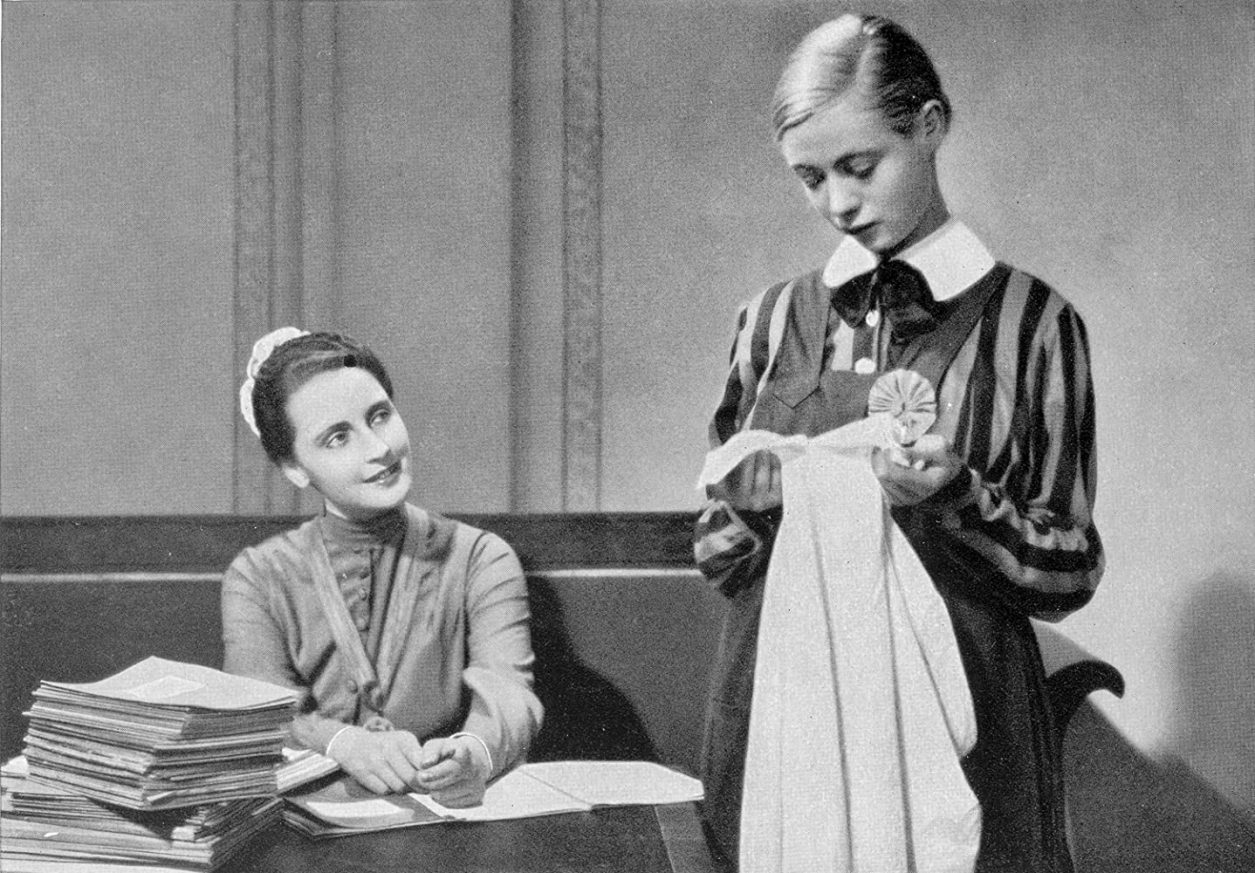 In 1931, Leontine Sagan directed the feature-length German film Mädchen in Uniform (Maidens in Uniform). The German-language cult classic follows “Manuela von Meinhardis” (Hertha Thiele), a young girl who is enrolled at a boarding school for girls, as she adjusts to life in a strict, all-female environment. (KIZJ: 4/5)

“Manuela von Meinhardis” (Hertha Thiele) lost her mother at a young age—and with a father away in the military—her aunt describes her as “almost an orphan” in German. Upon her arrival at the school, she swiftly is ushered to collect her uniform and surrender her personal items. Even books and letters from outside the school are not allowed without first being vetted by the teachers. Most of the students exhibit warm and inviting behaviors. Yet even with the playful jokes and encouragement, her start at school isn’t easy, and she senses she is the odd one out. When Manuela reveals that she’s in the dorm under “Fräulein von Bernburg’s” (Dorothea Wieck) watch, she is warned immediately not to fall in love with this teacher.

There is something about Fräulein von Bernburg that intrigues many of the students. In fact, the Fraulein is also a black sheep amongst the teachers, as she advocates that they use a softer approach toward the students. All the teasing from the students about crushes on teachers seems absurd at first. Still, Manuela quickly begins to see the caring nature of Fräulein von Bernburg, and the fourteen-year-old girl’s feelings are swayed from loneliness to love. 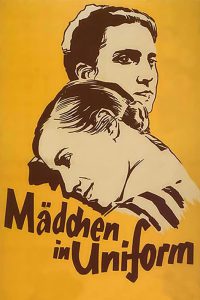 Based on a real-life girl who went to boarding school with the writer Cristine Winsloe, the story of Manuela has credibility. The writer admits that this experience led to heart-felt, authentic writing.  Additionally, the film blatantly shows sexual desires and same-sex crushes between girls in a way that even today could be uncomfortable to sit through for some. I, for one, was expecting a much more conservative portrayal of romantic interests. But including dialogue pretty early demonstrated lesbian feelings clearly—ensuring that the audience would know that sexual awakening was prominent. Of course, this is not to say that the film itself is focused solely on girls who have romantic feelings for teachers. There are other types of love at play here: the love of friendship between the girls and the maternal love that each of the girls search for in their teachers.

Nevertheless, to regard Mädchen in Uniform as a story about love alone would be a mistake. The brilliance of this film is that it does not fall into one specific theme. Should the audience allow their minds to zoom out, they will see that it also shows an attitude that protests against the authoritarian school represented through the headmistress, “Mother Fräulein von Nordeck zur Nidden” (Emilia Unda). Writers Cristine Winsloe and Friedrich Dammann created a story that alerted people to protest against the authoritarian and harsh Prussian education system. During multiple scenes, the girls complain that they feel hunger throughout the day, to which the headmistress responds that raising girls in luxury was detrimental. Another instance is when one of the students tries to write home and smuggles the letter out of the school, but due to an incorrect address, the teachers get hold of the letter and give the student a strong telling-off. There was no sense of personal space, privacy, or freedom for the girls.

A fascinating aspect of the film is the wide variety of women characters. As an all-female cast, portraying women in a set few stereotypical roles would have been a disaster. On social media group pages, I have come across screenwriters from the industry today who have difficulties creating interesting female characters. Their reasoning is that they fear misrepresenting women by accidentally creating a stereotype. The problem is precisely that they view these characters as “women” rather than just people. Instead of creating a three-dimensional person, they focus too much on a woman’s personality as possessing certain female qualities. As for the women in Mädchen in Uniform, they are distinct in their sensuality, femininity, and how they think and speak.

It may come as a surprise, but during the time between World War I and the rise of the Nazis, gay culture was celebrated more openly. Nonetheless, this was still a very ground-breaking piece because it had a strong lesbian theme. The writers had already made it more conservative as compared to the original stage play. This film was produced at an impressively low budget, and although it was eclipsed by the success of Der blaue Engel from 1931, it garnered a large body of fans across Germany and Europe. We can now look at it as an example of a past treasure that can encourage us to be more fearless in telling stories, even at the risk of discomforting viewers. 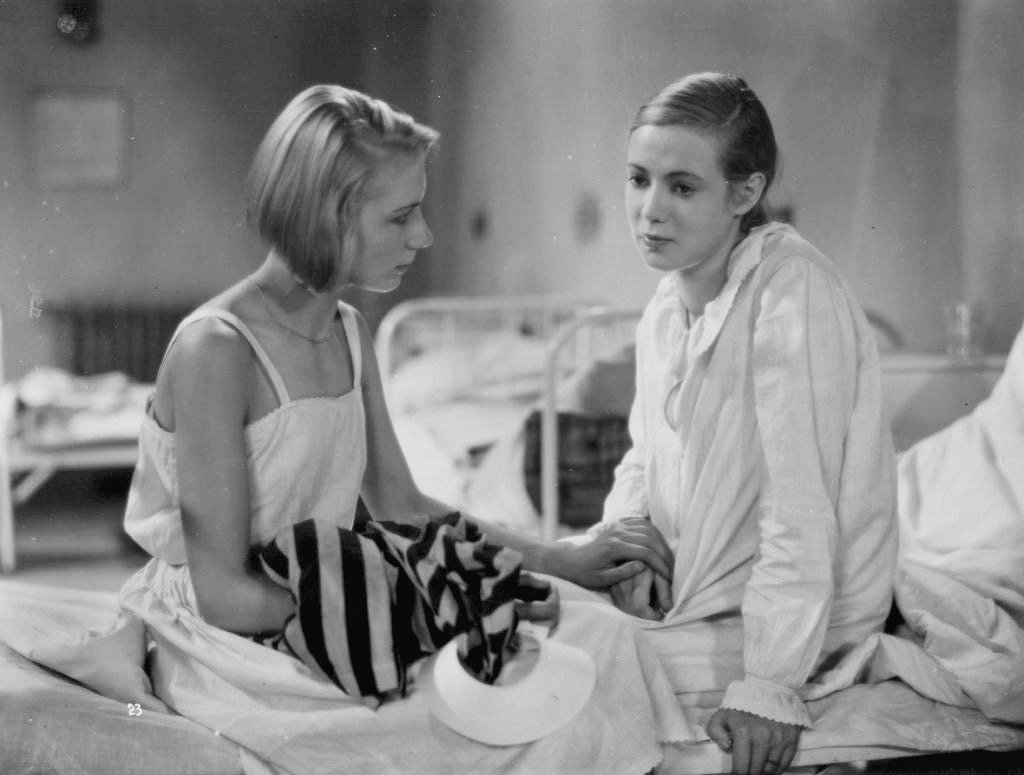 Bottom Photo: Hertha Thiele and another student in Mädchen in Uniform (1931)

Q: Does Mädchen in Uniform pass the Bechdel-Wallace Test?

With flying colors! There are only women in the film, so it would be difficult not to. 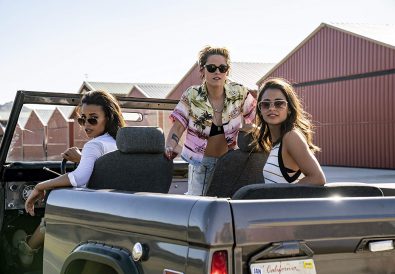