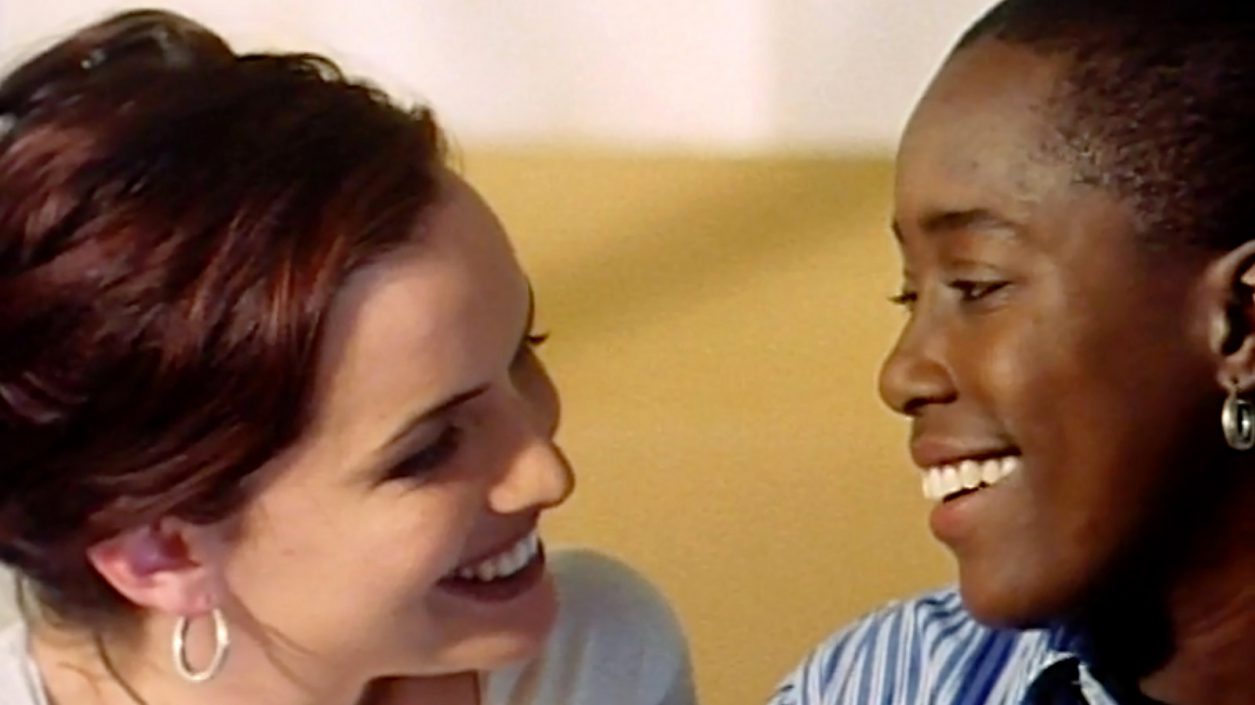 The Watermelon Woman focuses on a queer black novice filmmaker’s quest for clarity on the life of a fictitious Black actress of the 30s and 40s who was known for her roles as the archetypical “mammy”. Director Cheryl Dunye deftly yet subtly comments on racism in its stealthiest forms in this funny and conversation-sparking film. (RMM: 4/5)

Though it utilizes a light, funny tone, Cheryl Dunye’s The Watermelon Woman (1996) is steeped in commentary on racism, both in obvious and subtle ways. At the film’s beginning, we already know that racism exists and has existed for centuries. However, if you aren’t already actively conscious of racism and the ways it is ingrained in American culture and society, then you might blink and miss the core message that Dunye so cleverly relays: Racism, even in its most benign form, is still damaging and racist.

Accurate representation amid racist culture and thinking is what fuels protagonist “Cheryl” (played by Dunye herself) on her quest to understand the life of a fictional actress referred to as simply “The Watermelon Woman” in her film credits. With some digging and questioning, Cheryl will later discover the woman behind the nickname, “Fae Richards” (Lisa Marie Bronson), and the life she lived as a queer Black woman in an industry that would not allow her to have an identity outside of that prescribed for her. While Cheryl sees this, she fails to notice what her real-life counterpart, Dunye, has laid out before her: the white, liberal women surrounding her and how they perpetuate a sort of benign racism. Though benign technically means harmless, it is the very mask of harmlessness that distracts us from the disease that lies beneath it all. After all, racism is, by definition, harmful. “Benign racism” is an oxymoron, then, and one that throws us off its scent so that it can continue to work its disease.

Through her interviews, Cheryl pieces together a narrative of the romantic relationship between white director “Martha Page” (Alexandra Juhasz) and Faye. Cheryl is captivated by their story, by the doors that Martha opens for Faye in the film industry, but fails to see its simultaneous toxicity. When Faye’s life partner “June Walker” (Cheryl Clarke) expresses her dislike of Martha, Cheryl is surprised. June points out that Faye never liked playing those mammy roles she is given, and that it was her, not Martha, who paved the way for “kids like” Cheryl to make movies.

Cheryl herself begins dating a white woman, “Diana” (Guinevere Turner), halfway through the film. She does not see the parallel between herself and Faye and Diana and Martha. By all accounts, Diana seems to be just the kind of progressive and intelligent woman that Cheryl wants. She does not understand her friend “Tamara’s” (Valarie Walker) dislike of her either. But we, the audience, can start to see the influence that Diana holds over Cheryl, like when she dismisses her research on the Watermelon Woman as a side project.

Through Cheryl’s exploration of Faye’s life, Dunye reminds us that Black people have been barred time and time again from taking ownership of their own history and culture. As a white female archivist snatches documents on Black queer women away from Cheryl, claiming them to be confidential, we cannot ignore the pattern. In one of her interviews, Cheryl talks to the so-called “culture expert” “Camille Page” (Camille Paglia), a white woman who claims that the nickname “Watermelon Woman” has been misinterpreted as a negative or derogatory word. In the United States., the stereotype that Black Americans love watermelon exists to this day. Camille doesn’t understand why a picture of a boy with a watermelon, for example, is seen in a negative light. Why shouldn’t it be seen as joyful or bountiful? She continues talking about how there’s nothing bad about having a watermelon be a symbol for your culture, that it should be reclaimed as a positive image of Black culture. She even states that when you think about it, watermelons could even represent her Italian culture (!!)—suggesting that the colors of the watermelon are the colors of the Italian flag.

Now, watermelons actually are a very important symbol in my own Armenian culture. They represents summer, abundance, and a fertile fruit harvest. Plus, we just really like to eat them (normally with a side of feta cheese). The difference, however, is that we chose this symbol for ourselves. Black people did not. Furthermore, we never experienced the use of this symbol as a way to make us feel “less than,” like it is used against Blacks. It is easy to ask “what’s the big deal?” A watermelon alone holds no negative connotations. But if we look at the history of Africans and Blacks in America, we see the history that bred the symbol. When slaves were emancipated, many began to grow and sell their own watermelons. Whites who had previously owned slaves felt threatened, and over the years with the help of racist advertising and cartoons that feature Black people voraciously eating entire watermelons, the African American and the watermelon have come to signify childishness, baseness, and lack of civility. While Camille might hold to the idea that the watermelon can be reclaimed and rewired to signify joy, this isn’t the point. This symbol was forced upon a people and a culture. The nickname “Watermelon Woman” reduces a person, an actress, a lover, to a racial stereotype rooted in hatred. Such a nickname signifies that the woman is Black, while a white person is not limited to the nicknames given to him.

As if Camille hadn’t said enough, she shakes her head at Black American scholars calling the mammy figure degrading and desexualizing when she prefers to focus on her fertility and ferocity. Such positive associations can be made, but they don’t change the fact that we are facing another stereotype, a role that Black women did not choose for themselves. A Black actress in the 30s who wanted work would’ve had no choice but to take on such roles and perform a version of Blackness that white people had decided defined you. Sure, the mammies are loved by their white employers, but they are still subservient. They inhabit the role of the god-loving motherly cooks who lend their sage, Black wisdom to their white counterparts.

Perhaps the most important thing to glean from Dunye’s The Watermelon Woman is that it’s all about framing. Who is telling the story, and how do they tell it? No matter how loved a mammy is on screen and no matter what positive qualities ascribed to her, she is a physical embodiment of the white hold over her, her culture, and her sense of agency. Mammies can provide advice, but they can never act for themselves. They are kindly, but never bold. They are loyal but never free. Such depictions of Black women may never be erased from our collective memory. It is the job of allies today, however, to make space for and amplify authentic voices to tell their stories themselves.

Top Photo: Cheryl on her way to conduct an interview.

Middle Photo: Cheryl holds up a photo of an example of a  “mammy” character.

Q: Does The Watermelon Woman pass the Bechdel-Wallace Test?

With a cast of mostly women and featuring women as the subject matter, Dunye’s film definitely passes the test

by Roza Melkumyan September 9, 2020
As a member of the FF2 Media team, Roza writes features and reviews and coaches other associates and interns. She joined the team as an intern herself during her third year of study at New York University. There she individualized her major and studied narrative through a cultural lens and in the mediums of literature, theatre, and film. At school, Roza studied abroad in Florence and London, worked as a Resident Assistant, and workshopped a play she wrote and co-directed. Since graduating, she spent six months in Spain teaching English and practicing her Spanish. Most recently, she spent a year in Armenia teaching university English as a Fulbright scholar. Her love of film has only grown over the years, and she is dedicated to providing the space necessary for female filmmakers to prosper.
Previous Post Next Post