by Amelie Lasker
Bechdel-Wallace List Reviews: A
No comments 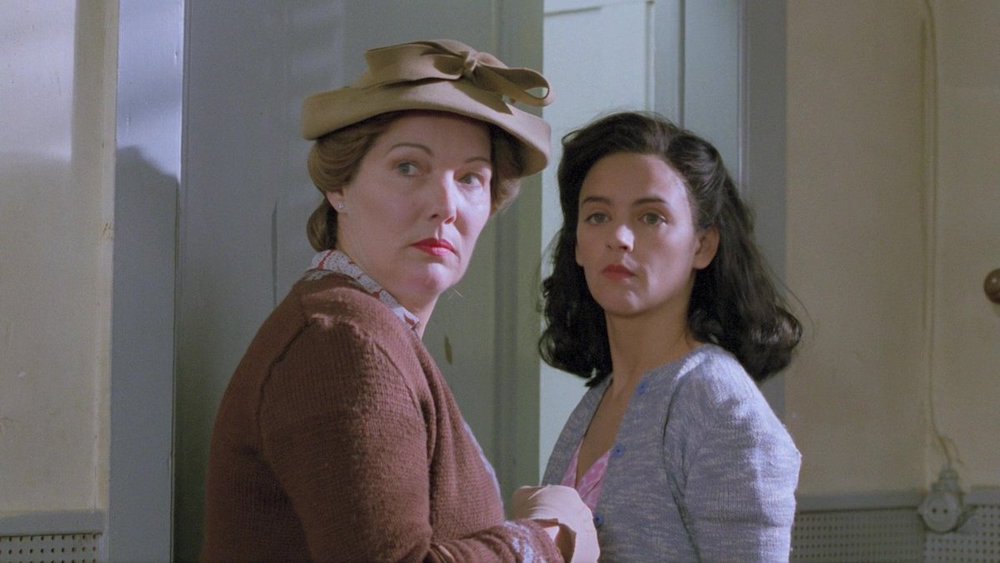 Antonia’s Line is a female-focused fairytale from the mid-1990s that transports viewers to a quaint Dutch village where Antonia builds a multi-generational eclectic family. This matriarchal society becomes a conduit to explore deep themes like love, religion, sex, death, and life’s meaning. (NBA: 3.5/5)

“It’s time to die,” Antonia says to herself in the mirror in the opening scene of the 1995 Dutch film, Antonia’s Line. It opens with Antonia as an old woman shown resigned to her knowing—it is her last day—before it immediately jumps back to trace Antonia’s remarkable life. Written and directed by Marleen Gorris, this feminist “fairytale” traces several generations of women in a small village and explores dark themes ranging from love to motherhood to death. It’s a unique film, and it might take a little while for the viewer to get into its headspace, but once you do, it’s a very enjoyable and thought-provoking watch.

After the opening, the film flashes back to Antonia’s return to her Dutch hometown following World War II. It’s the sort of village where having lived there for twenty years still marks you as a newcomer, and Antonia and her daughter Danielle’s appearance makes a splash amongst the villagers. Antonia reunites with her childhood best friend, is immediately sought out by a suitor, and quickly begins to take in eccentric outcasts from the village. The story follows her as her found family continues to expand as they meet more people, and babies are born. The story has a sort of ridiculous whimsy to it that lends it much of its charm.

The film has a large ensemble cast, anchored by Willeke van Ammelrooy as Antonia. Most of the characters are played by one actor through the time changes with a few exceptions, and the performances are solid, if not exceptional. Some characters like Antonia and Danielle have more fully-fledged personalities, but others are very extreme and appear more like characters from a children’s book. For example, Antonia’s childhood friend, “Crooked Finger,” is an academic recluse who hasn’t left his house since the end of the war. Meanwhile, a woman known as the “Mad Madonna,” howls at the moon nightly as “the Protestant,” who loves her—but cannot be with her because of their religious differences—listens on.

In addition to the over-the-top characters, the stylization of the film lends it a fairytale air. There are lots of pastels used throughout while the women often wear floral or patterned dresses. The movie was filmed in Belgium in a lovely quaint village that seems straight out of a picture book. The score, by Ilona Sekacz, is wonderfully emotive; a voiceover weaves throughout the narrative, giving it even more of a storybook aesthetic. Several times throughout the movie, Danielle imagines statues moving, and while the special effects are (delightfully) 1990s, it does lend even more of a whimsical touch.

For all of its whimsy, the film also touches on some heavy themes from death to religion to sex to friendship to love. The latter half of the movie focuses significantly on death and the meaning of life with a series of characters dying, including one by suicide. Characters also discuss religion with negative connotations and the portrayal of the clergy is as hypocritical, at best.

However, the film is most interesting in its views towards love and marriage. A neighboring farmer asks Antonia to marry him early on in the film and she refuses. “Don’t you need a husband?” he asks, and she responds, “What for?” Though they come to enjoy an affectionate and even intimate relationship, she continues to refuse marriage. While there are a few positive marriages seen in the film, Antonia and her daughter and granddaughter all avoid getting married despite pursuing relationships. You might say that the film has a cynical view of marriage, though the roots of this attitude are never fully explored.

There are aspects to the film that make it feel even older than its 1995 release date. One character is named Loony Lips, and another character is a girl who is differently-abled whose depiction is perhaps not up to modern standards but is relatively inoffensive. And yet, it feels very modern as it candidly portrays a lesbian relationship. Though the word itself is never used, the two women are shown naked together in bed. . .  so there is no question of the nature of their attachment.

Feminism is woven through the story at every level—the society depicted on Antonia’s farm is firmly matriarchal. But for all the ways that the film heralds Antonia’s strength and how she doesn’t need a man, it also doesn’t ignore the role of men in the world. We see firsthand the mistreatment of the neighbor girl Deedee at the hands of her father and brothers. Their behavior is extreme to the point of seeming cartoonish. There are also two rapes within the movie, though only one is shown on screen, that demonstrate the negative power of men. On the other hand, we see multiple positive portrayals of single motherhood, liberated female sexuality, and the feminine pursuit of the arts and knowledge. There are tender and caring male characters, but Antonia’s Line is only interested in how they relate to the women.

Antonia’s Line won the Academy Award for Best Foreign Language Film in 1996, making it the first feature film directed by a woman to win an Oscar. Gorris’s work is impressive throughout, both in how she handles tonal shifts and builds a large cast of characters and weaves the story around them. It’s a fascinating film that has been largely overlooked, despite its trailblazing history with the Oscars. Antonia’s Line is the sort of epic multi-generational story that we rarely see centered around women wrapped up in a fairytale-like exterior.

Several female characters discuss a young girl’s education together, amongst other scenes. Even though there are many male characters in the large ensemble, the film is very female-focused.

by Amelie Lasker September 28, 2020
Amelie Lasker joined FF2 Media in early 2016 after graduating from Columbia University where she studied English and history. She has written plays and had readings for Columbia’s student-written theatre company Nomads, edited the blog for Columbia’s film journal Double Exposure, and worked on film crews and participated in workshops at Columbia University Film Productions. She spent junior year abroad at Cambridge University, where she had many opportunities for student playwrights to see their work produced.
Previous Post Next Post