Musings on Meshes of the Afternoon: Maya Deren explores the landscape of the subconscious 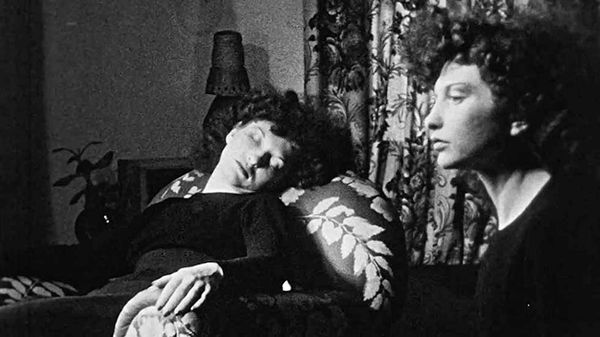 A woman picks up a flower on her way home and takes a nap in her living room armchair. What follows is a dream sequence with cyclical scenes of a shrouded figure, a bread knife, a key, a flower, a telephone, and a record player. In the short film Meshes of the Afternoon, Maya Deren creates an atmosphere of claustrophobic anxiety while exploring what the subconscious mind looks like. (RMM: 5/5)

Read additional thoughts on Meshes of the Afternoon by my colleague, Julia Lasker, below!

Though both Maya Deren and Alexander Hammid are credited as directors of the short experimental surrealist film Meshes of the Afternoon (1943), Hammid himself has called the film Deren’s. She is also credited with writing its screenplay. In this 14-minute film, a woman (Deren) picks up a flower on the street and walks up a set of stairs to her house, drops a key, then uses it to unlock the front door. In her living room she sees a sharp bread knife on the table, a telephone, and record player. After turning off the record player, she collapses into an armchair by the window and takes a nap.

At this point, the woman sinks into a sort of dream world which will seem more and more inescapable as she runs through the same scene several times with slight variations and changes of perspective. In each repetition of the scene, a shrouded figure with a mirror for a face walks down the street with the flower as the woman chases it before going back into the house. Each time, the knife’s location changes – from table to staircase to under the covers of her bed. She sees herself sleeping on the armchair. She also sees herself chase the figure with the flower several times. The shrouded figure walks into the house with the flower, goes upstairs, and lays it down on the bed before looking up at the woman, then disappearing.

In one loop, the woman runs into the house with a knife. She and two other versions of herself sit at the table and stare at the knife while a fourth continues to sleep on the armchair. The woman prepares to stab her sleeping self with the knife. Suddenly, she awakens to see a man (Hammid) – presumably her husband – who helps her up off the couch. Holding a flower, he walks upstairs and places it on the bed in a similar manner to the shrouded figure from the woman’s dream. She lays down on the bed, the flower becomes the knife, and she throws it at the man. The man walks down the street and up the stairs to the house. He opens the door with a key and sees the woman dead in the armchair.

There are several rather fascinating aspects of this film. For one thing, I was surprised to read that the original version had no musical score. Deren’s third husband, Teiji Ito, would later add a score influenced by classical Japanese music in 1959. This is the film’s version that exists today, and it features Japanese instruments as well as a single-note hum that grows louder as each loop in the narrative reaches its respective climax.

Music is often a very important part of a film; we see this most obviously in the horror genre, where scary or creepy music signals to our brains to feel anxious or scared when something scary is about to happen. In the case of Meshes, music certainly heightens the overall eerie ambience of the film. Still, it would be interesting to watch without music, as the film originally existed. I wonder if I would’ve felt as uneasy or focused so heavily on my own feelings had it been completely silent.

I love the way that each scene from the woman’s dream seems to build onto the previous ones. When the shrouded figure places the flower under the covers of the bed, we remember an earlier scene where the woman finds a knife under the covers. Maybe, then, the figure has actually placed a knife under the covers. At least three times we see the woman chase after the figure on the street before stopping and turning to the house. It’s almost as if we, too, are stuck in a looped film reel that repeats itself over and over. She, and we, feel trapped.

One might say that the woman’s dream is a manifestation of her own mental state. The repeated appearance of the knife could represent intrusive suicidal thoughts, which she tries in vain to stamp out until they take over her senses and she does actually kill herself. I wonder, too, if maybe her claustrophobia and suicidal thoughts stem from an unhappy marriage. After all, in her dream she does throw the knife at the man.

With Meshes, Deren has done a wonderful job at expressing the nonsensicality of the subconscious mind. After waking up from a dream, we might struggle to find the meaning in what we dreamed. Indeed, everything I’ve speculated about the meaning behind this film could be wrong. It’s more likely that there is no one true meaning, and Deren herself has said that the objects carry no significance either; they simply are.

I am reminded that everything we claim as a symbol only exists as such because we imbue them with meaning. For example, I could take the white flower to signify purity and the cloaked figure to represent death. This preoccupation with symbols and meaning, I think, misses the point of the film which is to create an experience for the viewer. A symbol, after all, is a given thing. If we didn’t assign them to objects, then they wouldn’t exist. A white flower does not innately represent purity. Rather, such a meaning has solidified over centuries of art and writing describing it thus.

The beauty of this film is that you could watch it repeatedly and it would still yield new insights. Plus, it’s just so creepy and cool! I mean, a mirror for a face? How clever. The image itself of a goggled Deren wielding a bread knife is enough to leave a lasting impression.

Contextualizing the film: The Feminist Implications of Meshes of the Afternoon

Meshes’s Surrealist style originated in Paris in the 20s and eventually made its way to the US. Surrealist art traditionally explores the Freudian subconscious, presenting images that are uncanny, absurd and, well, surreal, to demonstrate a world that exists over and above our concrete and lived reality. Surrealism represents a break from the Classic Hollywood Cinema style, which portrays its story in clear and linear plotlines. In contrast to Classic Hollywood Cinema, which presents experiences that happen in the world, Surrealism presents experiences that happen in the human psyche.

Enter Surrealism (and a female director). Using a Surrealist style for Meshes allowed Deren and Hammid to present a woman as more than a body or an object. In fact, the film hardly ever portrays Deren in full at all; we often see her through glimpses of her hands or feet, or her shadow, or close up to her face. What we do see a lot of, though, is her experience. The warped timeline of the film allows us to sense the disorientation she feels in the dream world, and point-of-view shots allow us to see, literally, what she’s seeing. So Meshes is a total rebellion against the portrayal of women in Classic Hollywood; not only is its female protagonist not objectified, she is portrayed genuinely, and not subject to a Classic Hollywood male traditional view of the “reality” of women.

Meshes of the Afternoon is important to watch for the historical implications of its surrealist film style, but on top of that, it’s just an awesome film: the surrealism makes it absolutely fascinating and unlike any other film out there.

Featured Photo: The woman sits next to her sleeping self.

Top Photo: The woman prepares to stab her sleeping self.

Middle Photo: A telephone sits on a staircase.

Bottom Photo: The shrouded figure turns back to reveal a mirror for a face. 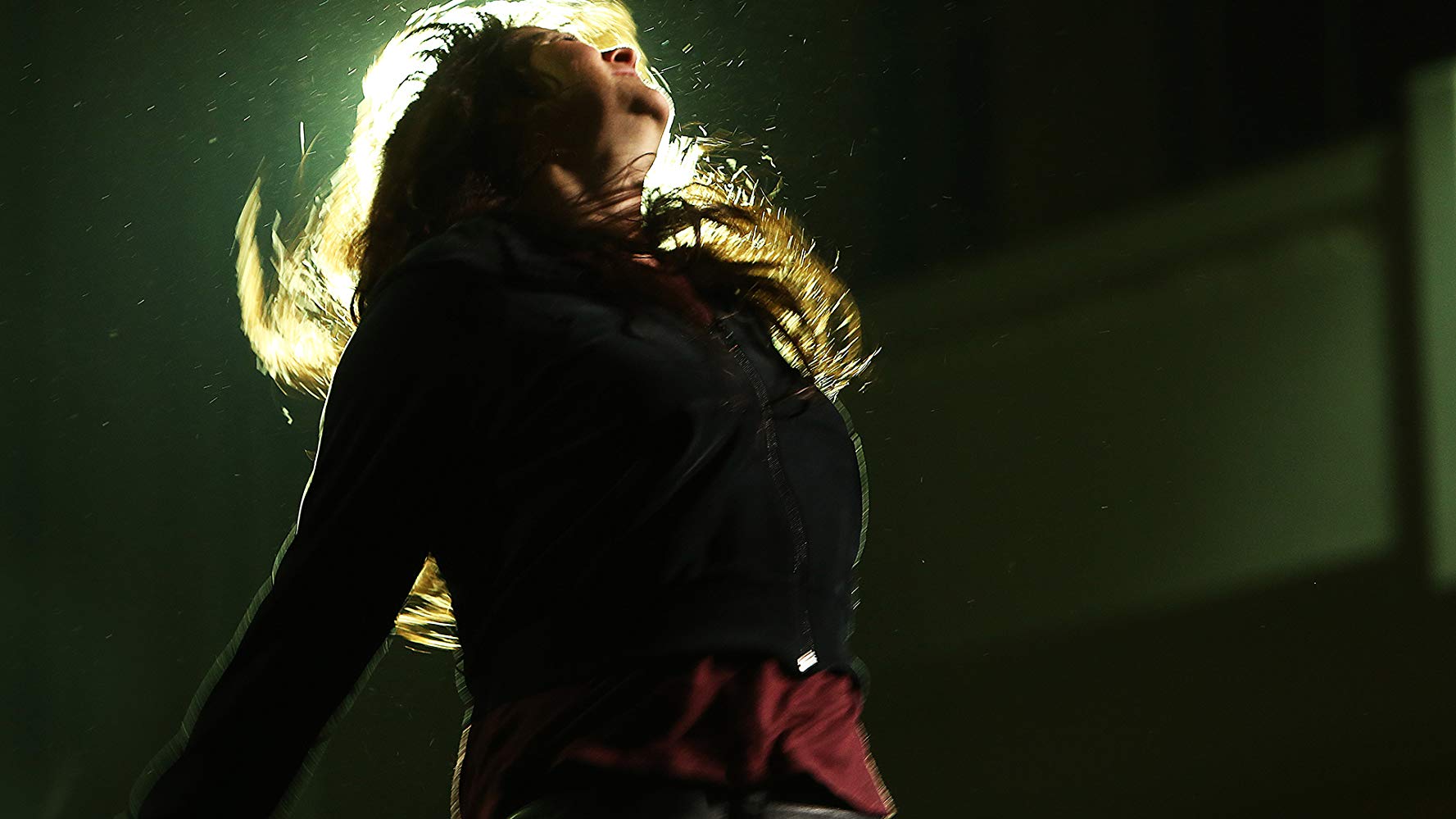 by Roza Melkumyan October 6, 2020
As a member of the FF2 Media team, Roza writes features and reviews and coaches other associates and interns. She joined the team as an intern herself during her third year of study at New York University. There she individualized her major and studied narrative through a cultural lens and in the mediums of literature, theatre, and film. At school, Roza studied abroad in Florence and London, worked as a Resident Assistant, and workshopped a play she wrote and co-directed. Since graduating, she spent six months in Spain teaching English and practicing her Spanish. Most recently, she spent a year in Armenia teaching university English as a Fulbright scholar. Her love of film has only grown over the years, and she is dedicated to providing the space necessary for female filmmakers to prosper.
Previous Post Next Post