Esmer’s 10 to 11 is grounded and touching

by Carlotta Plys-Garzotto
Reviews: #
No comments 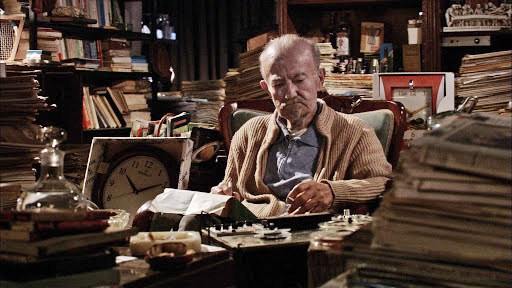 You can watch Pelin Esmer’s 10 to 11 as part of Turner Classic Movies “Women Make Film” series on 9/16 at 5:15 AM. TCM will feature films from 12 decades—and representing 44 countries—totaling 100 classic and current titles all created by women. Read more about this here!

Pelin Esmer wrote and directed 10 to 11 based on her uncle, who actually plays the main role of “Mithat” (Mithat Esmer). Set in Istanbul, Turkey—where Esmer is from—the stubborn and elderly Mithat is an avid collector, and his apartment looks like an episode of “Hoarders”. This is only one of the reasons that Mithat finds himself fighting against all of his neighbors, but he discovers unlikely companionship in the building’s caretaker “Ali” (Nejat Isler). (CPG 3.5/5)

After an earthquake strikes, the residents of Mithat’s building all agree that the complex must be torn down and rebuilt for safety reasons. Furthermore, everything will be upgraded—a garden and pool will be added, a parking garage, security, and the property value will go up immensely. Everyone is over the moon about the idea—everyone except Mithat, who says he does not need these new amenities. He is happy to be set in his ways, and seems to despise any kind of change. His top priority in life is his collections, which range in everything from newspapers, books, stickers and stamps, to alcohol bottles. As you could imagine, his apartment is stuffed to the brim and even overflows into the hallway much to his neighbor’s dismay.

As a viewer, you know Mithat has some issues off the bat. Esmer does a great job with the design of the movie, making Mithat’s apartment feel as dusty and crammed as it is described as. Furthermore, the colors of the film are a subdued range of beiges, setting the tone perfectly. Mithat’s situation is portrayed pretty bleakly, and you can’t help but feel for the guy. His neighbors and family members repeatedly try to convince him to clean out his place, saying it’s a hazard both to himself and others. Mithat meets any such request or suggestion with hostility, however. He also keeps to himself, barely answering the phone when family calls and avoiding meeting up with anyone. He does allow a nephew to come over eventually, but besides that the only person he willingly invites into his home ends up being the building’s caretaker Ali.

Ali lives alone, like Mithat. This is not by choice, however, as it with Mithat. We learn that Mithat was married, and actually chose his collection over his

marriage. Ali, however, had to send his wife and child to the countryside, where his parents, live temporarily because his young daughter got asthma living in his basement apartment. Though their situations are drastically different, Ali also is scared of the building being torn down because he will lose the job as caretaker. Mitthat and Ali are both lonely at the end of the day, and their relationship becomes quite touching to the viewer. The unlikely pair become symbiotic, and I think Esmer is highlighting to the need for human connection in this world.

The first thing I noticed about 10 to 11 is the deliberately in-your-face sound design. You can’t escape the themes of time, discomfort, and deterioration with loud clock hand ticks or water droplets overtaking your ears and focus. Recording is also something very important to Mithat, and his recorded conversations overlap and flow through the film. This somewhat dreamy and surreal approach successfully makes the viewer feel like they are in Mithat’s cluttered mind and world.

Esmer’s writing is genius, there are so many little clues and hints throughout the script that highlight the larger themes without being too obvious. This makes the movie a fun watch, because you catch certain words being repeated. Mithat enjoys watching a game show, one that seems a lot like the United State’s Jeopardy, and the movie is a bit like a quiz / puzzle as well in that way. Especially how in Jeopardy you’re given the answer and have to come up with the question—Esmer’s style has that way of not revealing things in an obvious or easy way to the audience.

The film is one hour and forty-six minutes, though I have to say it does feel much longer. There is not much action in this story, and many of the scenes drag on a bit. At the beginning, before you really get to understanding what’s going on and who’s who, the film is a little confusing. However, the style does serve the understated and heartfelt core of the film well.

Overall, 10 to 11 is a great watch—just know you’re not sitting down to an action-packed thriller. Esmer is a talented writer and director, and displays that in this film.

No, the two main characters in the film are men so there is never a scene of only women.

by Carlotta Plys-Garzotto October 9, 2020
Carlotta Plys-Garzotto was born in Chicago and attended acting and drama therapy school in New York City. She recently relocated to Los Angeles to try out the film industry. Carlotta has always been drawn to the arts whether it's visual, writing, theatre, or film. She has recently been taking improv classes at Upright Citizens Brigade. Carlotta is a Leo with an Aquarius moon. She loves making music videos, eating ice cream, and traveling.
Previous Post Next Post