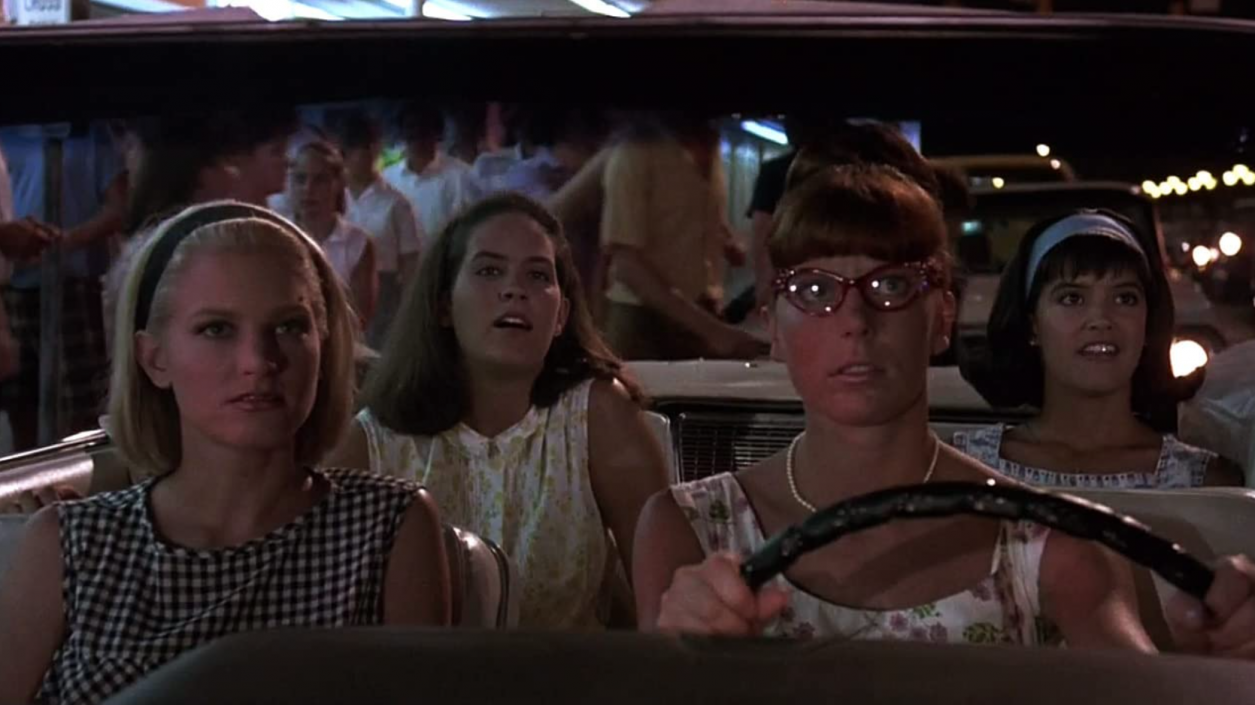 British director Zelda Barron directed Shag in 2001—a film that throws its audience back to simpler times. Starring Page Hannah, Annabeth Gish, Phoebe Cates, and Bridget Fonda, Shag is a friendly and heartwarming film where getting caught by the parents is life’s biggest disaster. (KIZJ: 3/5)

It’s a quiet suburban neighborhood. The paperboy is doing his usual rounds and chucks the morning’s paper towards the front porch of the senator’s big white house. The housekeeper brings it in and brushes against “Luanne” (Page Hannah) on her way up the stairs. Luanne is clumsily rushing down with a mini-suitcase in hand and fumbles her way to her mother’s car. Finally, she can pick up her three girlfriends for a weekend away they hope never to forget.

The girls’ characters are as typical as roles in a rom-com set in the late 1950s can get. Luanne is the uptight one who has difficulty relaxing. She is a goody-two-shoe who’s afraid of doing anything in case it’s against the rules. “Pudge” (Annabeth Gish) is the friend with low self-esteem, no thanks to her mother, who keeps telling her to stay on a diet. “Melaina” (Bridget Fonda) is the friend who is so confident that she allows herself to step out of line to chase after her future Hollywood fame as though it’s a guarantee. Lastly, there’s “Carson” (Phoebe Cates), who’s engaged and whose future has already all been decided.

The girls drive away from their innocent and perfect lives in Spartanburg, South Carolina, to Myrtle Beach—the teenagers’ heavenly getaway that promises boys, beer, and parties. This is a world before the assassination of John Kennedy and the Vietnam war, where teenagers from well-to-do families lived simple lives. In these suburban households, the girls’ goal was to get the boy. There are no drugs, no jail, and the biggest scandal is wearing clothing from a mother’s closet that might be somewhat revealing. Oh, and getting caught by the parents of course.

Director Zelda Barron’s Shag is a film that elicits nostalgia for teenage life in a similar way to American Graffiti, Grease, Dead Poets Society, and Hairspray, except without serious themes. Instead, it’s a playful and goofy coming-of-age teen comedy that doesn’t take itself too seriously. Despite being set decades apart, the drama of “who has a crush on whom” also reminds me of Amy Heckerling’s Clueless and Autumn de Wilde’s Emma.

Since it is such a typical teenager romcom, needless to say, the plot written by Robin Swicord, Lanier Laney, and Terry Sweeney is rather predictable. This is not a fault, but for me, it puts this film into the pile I watch when I want to relax. What it lacks in surprise plot points, it makes up for in the acting. Page Hannah, Annabeth Gish, Phoebe Cates, and Bridget Fonda are a fantastic cast, shining in these roles. The differences in their characters and their relationship dynamics are fun and heartwarming to watch. For younger audiences, this film may encourage them to question the meaning of romantic relationships, marriage, and friendships. It could also serve as a reminder about the importance of confidence—one of my favorite themes of the movie. But for those in college or older, this is a film to watch and reminisce about younger times. It’s probably something to watch with old friends at a sleepover during a night in.

Although this film is absolutely filled with talk about boys, the girls do have moments to discuss fashion, style, and dreams.