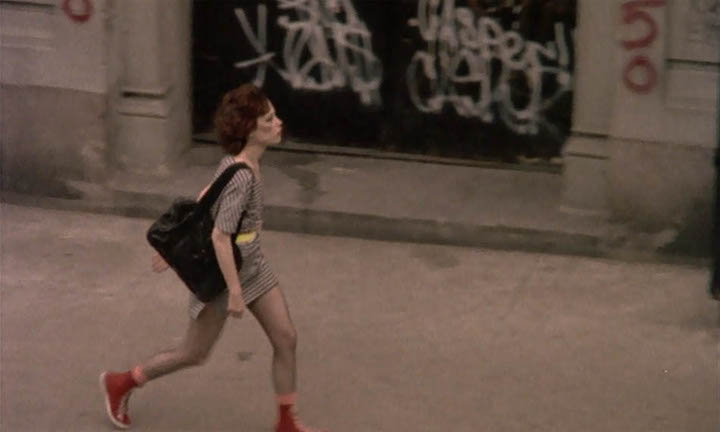 TCM featured films from 12 decades—and representing 44 countries—totaling 100 classic and current titles all created by women. Read more about this here!

Susan Seidelman’s Smithereens (1982) tells the story of Wren, an aspiring punk star, as she makes her way through an unforgiving New York social scene. Wren struggles, but she finds ways to survive, and her strong personality and lovable style have made her story a cultural classic of 1980s New York. (AEL: 3.5/5)

We meet “Wren” (Susan Berman) as she stalks around the subway in an incredible punk outfit, pasting up unlabelled, self-promotional flyers. Young “Paul” (Brad Rijn) is captivated by her, so he follows her out of the subway and to her apartment building to ask her out. Her response is  lukewarm; She leaves him on the street, only intensifying his fascination.

It’s fitting that we are first introduced to the protagonist through the eyes of a young man who sees her as a muse. Since Paul recently moved to the city from Montana, Wren is his New York fairy tale. But Wren’s identity flickers as she tries to find her feet, and we soon learn that her cool mystique has little underneath.

After that shaky start to their relationship, Wren agrees to go on a date with Paul. At the bar, they meet “Eric” (Richard Hell), a member of a band Smithereens that was a one-hit wonder ten years ago. Sensing a networking opportunity, Wren abandons Paul to go home with Eric, and Paul is understandably frustrated. This is how Wren has learned to cope with her sidelined position socially and professionally: seizing onto opportunities where she can, with no time for loyalty or genuine connection.

Wren moved to New York to try to enter the punk scene, but this dream has proven difficult, and Wren is struggling for money. Now, her misfortunes are culminating. Her landlord has locked her out of her apartment and started throwing her things out onto the sidewalk, and her sister’s family won’t help her, sick of her constant needs and “irresponsible” lifestyle.

That night, Wren clomps down the street in flimsy shoes, without a place to sleep. Susan Berman’s acting is most impactful in these moments: Wren has vulnerability under her learned hardness, under the trendy femininity that makes men want to be around her, but not in a way that she can make any real friends.

Wren feels like a sister to the title character of Fleabag, floating from person to person and identity to identity, a sponge.  Phoebe Waller-Bridge said in an interview that she likes to humanize “extremes.” Her Fleabag is one possible extreme of the experience of being a woman as object: you become just an empty vessel, hungry for sexual validation. Others see Wren this way too: at best, Paul sees her as an empty canvas for his urban fantasies; at worse, Eric sees her as a vulnerable target.

Although success eludes Wren, this movie is still a punk classic, with a soundtrack that includes the Feelies and Richard Hell & the Voidoids. If anything, Wren’s failures make it even more punk: she’s following a city, a scene, and a dream—no matter how desperate she becomes.

Wren talks to her sister and her landlady about herself and her situation. They’re not positive or caring interactions, but they do pass the test.

by Amelie Lasker December 26, 2020
Amelie Lasker joined FF2 Media in early 2016 after graduating from Columbia University where she studied English and history. She has written plays and had readings for Columbia’s student-written theatre company Nomads, edited the blog for Columbia’s film journal Double Exposure, and worked on film crews and participated in workshops at Columbia University Film Productions. She spent junior year abroad at Cambridge University, where she had many opportunities for student playwrights to see their work produced.
Previous Post Next Post