‘The Photograph’ is a Testament to the Power of Gesture 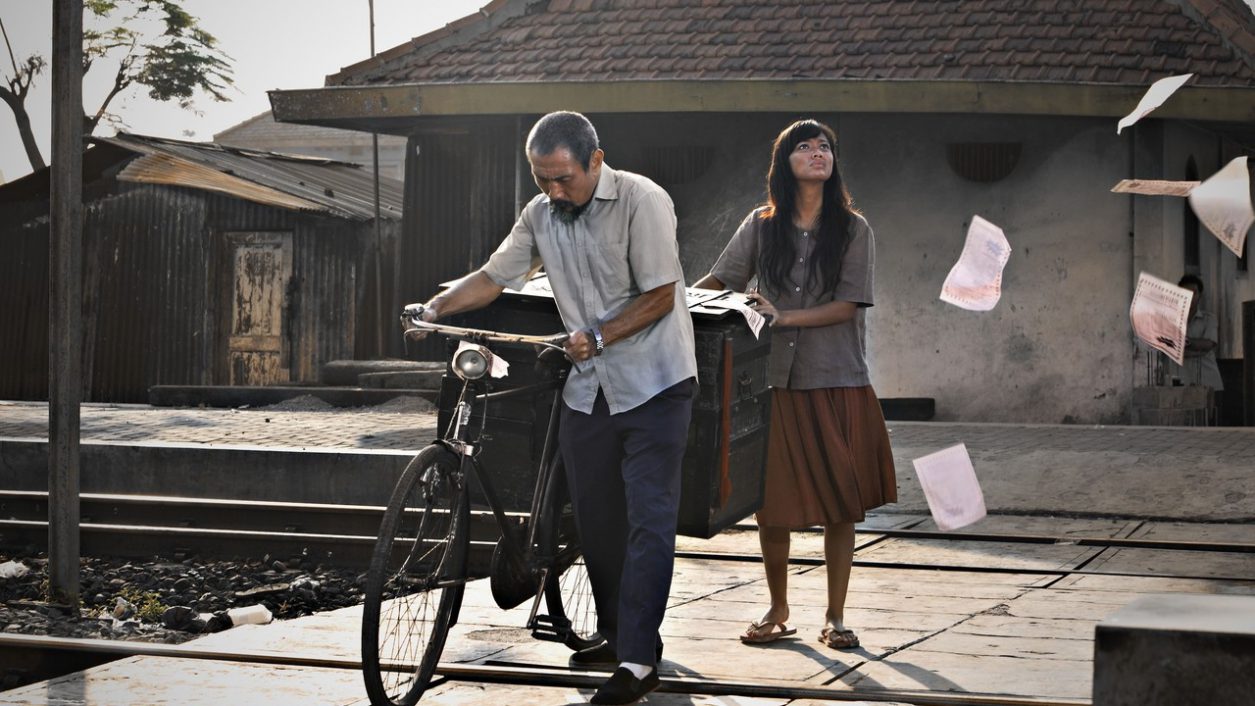 A prostitute struggles to save money for her far-away family while suffering gross mistreatment from her pimp. When she moves into an aging photographer’s spare room, she finds herself growing to care for her new landlord. Through their newfound friendship, the two are both able to heal emotionally and spiritually. Indonesian director Nan Triveni Achnas delivers a film that deftly expresses pain, sorrow, love, and care. The Photograph’s (2007) main actors execute their scenes with poignancy. (RMM: 3/5)

In Indonesian director Nan Triveni Achnas’s fourth feature film, two people develop an unlikely friendship amid the trauma they both face. “Mr. Johan” (Lim Kay Tong) is an aging Chinese photographer who runs a portrait business in town. A solitary man, he meditates daily in front of a set of weathered old photographs, which seem to haunt him. One day, he meets a young woman named “Sita” (Shanty) who has come looking for a place to stay after being evicted from her previous lodging. Though Johan does not want any company, Sita soon convinces him to allow her to rent the dusty spare room upstairs. She sets to work shaking the dust from the furniture and setting up her own personal photographs on the wall.

Both Johan and Sita find their drive within personal motivations. Sita works as a singer and prostitute in a karaoke bar to send money to the village where her mother takes care of her young daughter. As she endures emotional and physical abuse from her violent pimp “Suroso” (Lukman Sardi), she finds strength in hearing their voices over the phone. However, when several clients gang-rape Sita while Suroso sits by, she decides she cannot do this work any longer.

With no way to pay rent, Sita agrees to clean around the shop. Knowing that he will die soon, Johan is determined to find an apprentice but ignores Sita for consideration as she is a woman. Still, she helps him search, hang flyers around town, and interview potential candidates while observing Johan at work.

As Sita becomes more interested in not only photography but in Johan’s own mysterious past that still troubles him, she finds herself growing rather fond of the older man. She sits with him in the mornings as he prays at a small altar by the train tracks outside of town. Eventually, he will reveal to Sita the dark memories associated with the spot, and the audience will better understand his obsession with finding an apprentice. In the meantime, his health deteriorates, and he must lean on Sita – both mentally and physically – for support as he lives out the final few days of his life.

In its more filler-like scenes, The Photograph doesn’t exactly impress with script content or delivery. When Sita pleads with Johan to allow her to rent the upstairs room, she speaks as though she’s reading the lines right from the script. Johan’s subsequent change of heart happens quickly and unconvincingly. Here would have been a great moment for the filmmakers to take a pause and take us into Johan’s mind and see the change happen in real-time, through facial expressions or line delivery.

In its most foundational scenes, however, the film excels not only in tugging on our heartstrings but in allowing us to empathize more fully with the personal struggles these characters face. In my favorite scene, Sita breaks away from her pimp for long enough to make a call at the payphone outside the karaoke bar. Standing in a filthy booth, she speaks with her beloved daughter and mother, who she misses dearly. Her voice becomes soft and sweet – she is actively inhabiting her role as mother – and full of longing. Meanwhile, an impatient Suroso bangs on the wall to signal that it’s time to get back to work. The purity, safety, and love that her family represents are juxtaposed to the grime, darkness, and danger surrounding her. In order to care for her loved ones, she must wade through the waters of this sinister world, debasing herself in the journey.

Shanty and Lim Kay Tong have wonderful chemistry on screen. Sita cares for the dying Johan as a daughter might care for her father, and Johan offers Sita protection and concern. As he lies in pain on his bed, Sita removes his shirt and washes his chest. When he collapses into her, exhausted, my heart breaks. The action lets me know that he is either comfortable enough with Sita to show his vulnerability or just so wearied that he cannot keep up the facade of strength any longer. Their small, intimate gestures call to mind films like Adoption (1975)or O Ébrio (1946), films that I’ve similarly lauded for their subtle, wordless, emotive acting. Funnily enough, all three of these films are foreign. Without even understanding their dialogue, I feel their emotion.

The Photograph is a testament to the power of gesture over words. Achnas directs unassumingly, allowing cinematographer Yadi Sugandi the space necessary to perfectly frame the actors’ performances as well as the striking scenery of the set.

Featured Photo: Johan and Sita spread flyers around town for a new apprentice.

Q: Does The Photograph pass the Bechdel-Wallace Test?

by Roza Melkumyan February 8, 2021
As a member of the FF2 Media team, Roza writes features and reviews and coaches other associates and interns. She joined the team as an intern herself during her third year of study at New York University. There she individualized her major and studied narrative through a cultural lens and in the mediums of literature, theatre, and film. At school, Roza studied abroad in Florence and London, worked as a Resident Assistant, and workshopped a play she wrote and co-directed. Since graduating, she spent six months in Spain teaching English and practicing her Spanish. Most recently, she spent a year in Armenia teaching university English as a Fulbright scholar. Her love of film has only grown over the years, and she is dedicated to providing the space necessary for female filmmakers to prosper.
Previous Post Next Post